Franklin had the best finish as a team, scoring 93.5 points at the D1 meet despite not sending a wrestler to the finals. Mansfield finished 12th overall (68.5 points) and Taunton took 33rd with eight points; Springfield Central won the meet with 173 points. In Division 2, King Philip had the top finish with 62 points at 10th overall, North Attleboro was right behind with 53 points in 12th place, and Milford recorded 50 points for 14th overall. Stoughton (36.5 points), Sharon (35 points), and Canton (30 points) all finished in the top 30. Foxboro, the lone Hock school to compete in D3, finished in 19th with 39 points.

Sevastos entered the tournament as the #2 seed and picked up back-to-back pins to advance to the semifinals. He opened the tournament with a pin over Longmeadow’s Charlie Townsend (2:53) and followed with a pin over Brookline’s Lyle Gray (2:48). He scored five points in the third period to notch a 6-4 win over #6 Chelmsford’s Patrick Hughes in the semifinal and then earned a third-period pin (5:26) over #5 Brockton’s Aiden Winn in the final. Glaropoulos was the top seed in the 170 bracket and made quick work of his opponents, picking up pins over Framingham’s Mario Cruz (1:17), Andover’s Sean Ballou (0:48), and Agawam’s Tom Caracciolo (0:22) to advance to the final. He had a first-round takedown, a second-round nearfall, and a third-period reversal to beat #3 Methuen’s CJ Brown, 7-0.

Marinilli, a senior, won his second state title with four pins. The top seed, Marinilli pinned down Whittier’s Luke Iamele in under a minute, took down Winchester’s Kevin Miranda in 1:03m and pinned Central Catholic’s Matt Shaw in the semifinals in 4:19. In the final against #3 Arlington’s Yanni Kechriotis, Marinilli had four takedowns in the first period before getting the pin at 1:57. Conniff also entered the tournament as the top seed in his weight class and had four pins to win the title. He knocked off Woburn’s Mattheus Berbert (0:27), Oliver Ames’ Max Anderson (1:28), and North Andover’s Jack Carbone (3:18) to reach in the final. Against #2 Beverly’s Alexi Echevarria, Conniff had a takedown in the first round and got the pinfall 12 seconds later for the title.

Neiva started the tournament with a pair of pins, taking down North Attleboro’s Keysun Wise (3:20) in the Round of 16 and Woburn’s Mike Mercer (2:25) in the quarterfinals. He took down #3 Plymouth North’s Andrew Dias by decision in overtime, getting a reversal and nearfall to win 9-4. In the final against #1 Central Catholic’s Anthony Mears, Neiva was knotted 1-1 through three rounds. In the second overtime, he had an escape and takedown to secure the title.

Three Hockomock wrestlers also reached the 100-win club on Saturday. Franklin’s Dom Sackley earned his 100th win and finished fourth in the 160 bracket. After picking up a win in the Round of 16 (pinfall in 1:34), Sackley headed to the consolation bracket where he won three straight matches by decision before falling in the third place match. A pair of Rocketeers also earned their 100th wins at the tournament. Ethan Smith, wrestling at 126, posted a 3-2 record and finished in fifth place while recoding his 100th win. Teammate Mike Edmonds also earned his 100th win, going 4-1. He won two matches before falling in the semis but bounce back to take 3rd at 170. 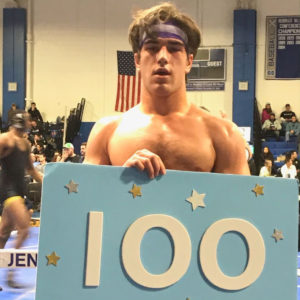 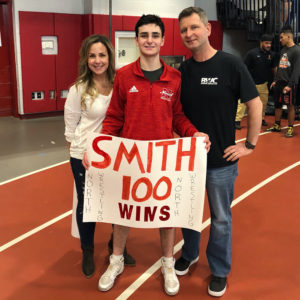 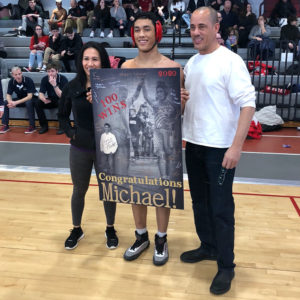