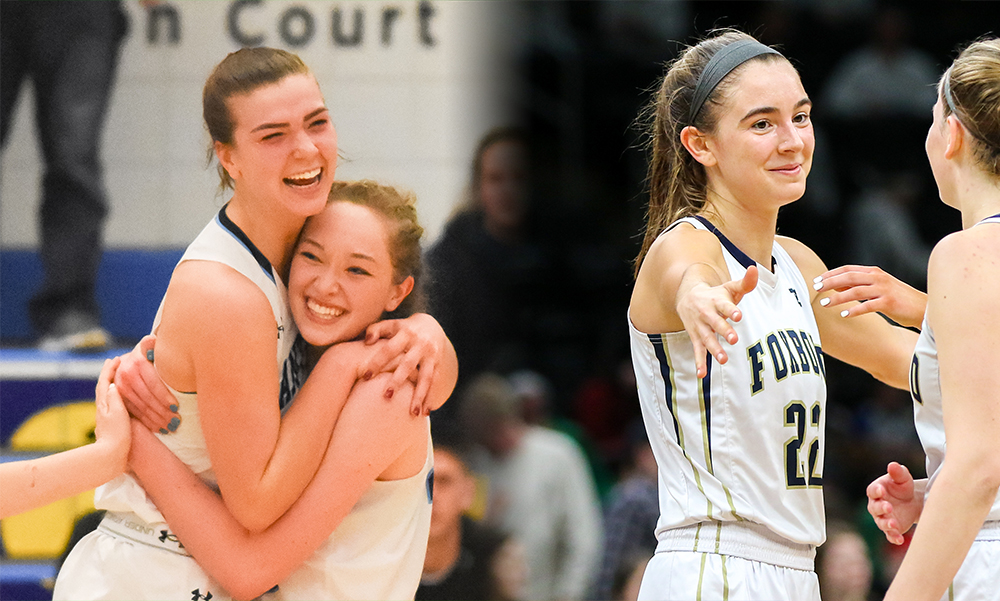 Both the Franklin and Foxboro girls basketball team were practicing on Thursday evening when the news filtered through that both of their seasons had ended with a victory, although neither got the opportunity to complete their impressive seasons by taking the floor in a state championship game.

The MIAA announced early Thursday evening that it was canceling the state championship basketball games originally slated to be played on Saturday in Worcester out of concern for the COVID-19 pandemic. The six hockey state championship games scheduled for Sunday at the TD Garden were also canceled and the beginning of the spring season has been postponed for at least two weeks.

With the decision to cancel the finals, the teams that had reached this stage were declared co-champions. Foxboro will share the Div. 2 title with West champion Taconic, earning the Warriors a second state title in three seasons. Franklin finishes its season at 25-0 and will share the Div. 1 crown with North champion Andover, claiming the first state title in program history and widely regarded as the top team in the state.

For both teams, it is hard not feel the season’s end and the state titles were anti-climactic after the excitement of winning four or five tournament games.

“I got up at 3:30 this morning to start watching film because I didn’t know if we were going to be able to practice on Friday or if they were doing team stuff, there were just no details,” said Foxboro coach Lisa Downs. “So, I went from watching film in the middle of the night to my day job to practice and then I got the call. It was like, ‘what just happened?’ It just feels like a bad dream.”

Franklin coach John Leighton said, “They wanted to be able to get some closure and finish what they started and that will never come. They were frustrated, but they knew it might be coming. We practiced today more hopeful than optimistic.”

The players were understandably disappointed with the decision, although, as Leighton explained, there had been discussion about not having the finals for several days.

“One of the things we always talk about is ‘control what you can control’ and that’s usually fouls and effort but we talked about this all week too,” he said. “On Tuesday, the tournament director even came up to me and said, ‘Hope you get to play on Saturday.’ So we kind of had a hint that it might happen.”

Downs was grateful that her team was at least able to experience playing at the TD Garden, after being denied that chance because of a snowstorm during the 2018 state title season.

“I think it would’ve been so much worse if we hadn’t gotten to play at the Garden,” she said. “Yesterday I thought, okay we’re probably going to be playing in an empty gym, which sucks but at least they get to play the game. The girls don’t understand, you know, they’re 17-year-old kids. They’re just like, ‘They can take everyone’s temperature.’”

Franklin was start-to-finish the top-ranked team in the state. The Panthers made history last year by reaching the state semifinal, but came out this winter with renewed focus and raced through an unbeaten season, which included wins over D2 champion Foxboro, D1 South champion, Bridgewater-Raynham, and D4 champion Cathedral.

“We became really hard to beat,” said Leighton. “They were always hungry to get better Even last game, when we walked off the court they weren’t super happy. They knew it wasn’t their best game and they couldn’t wait to go play another.”

The state championship run was also the coronation of senior center Ali Brigham’s career with the Panthers. She finished as the top scorer in not only the program’s history, but the school’s history as well. Leighton credits the George Washington-commit with raising the profile of the program and making them into a perennial state power.

Leighton said, “She’s changed the program. The expectation of the kids who are going to come play basketball at Franklin has changed. She chose to stay all four years. That was selfless of her and her play this season was selfless. It says a lot about who she is as a kid.”

Foxboro finished the season 24-2 and on a 15-game win streak, which included a difficult run through the South sectional, knocking off Pembroke (which beat the Warriors in last year’s semifinal), Old Rochester, and Hingham. Defense was the key, as Foxboro allowed the second-fewest points per game in the league this season (37.6) and bettered that average in the playoffs (36.8).

“I don’t want everything ending so abruptly to overshadow that these girls were able to go 24-2,” said Downs. “From last year getting pummeled in the semifinal and having basically the same group of girls and getting progressively better throughout the course of the season. In postseason, you could see they were where you’d want a team to be. We had just so many pieces to the puzzle that we haven’t had in other years.”

Due to the unfortunate circumstances surrounding the COVID-19 pandemic, neither Foxboro’s or Franklin’s season ended with the trophy and celebration at center court that typically follows winning a state championship, but both teams will be able to add another state title banner to their programs’ legacies.