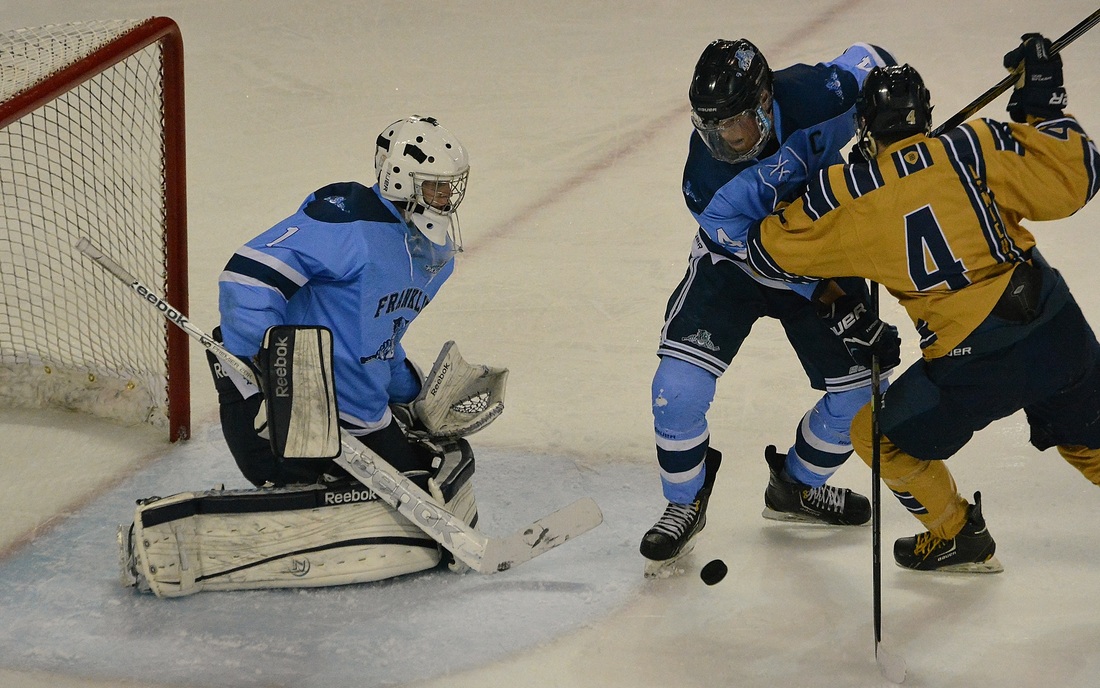 Ryan Shea made 39 saves, but it was not enough, as Franklin fell to Malden Catholic 2-1 in the opener of their best-of-three Super 8 series. (Josh Perry/HockomockSports.com)
By Josh Perry, Managing Editor
LOWELL, Mass. – The Panthers proved that they belonged in  the Super 8 with a dramatic overtime win against Xaverian that set up a best-of-three series with the four-time defending champion Malden Catholic.

On Tuesday night at the Tsongas Center at UMass Lowell, Franklin took the lead against the Lancers and had the chances to pull an upset, but eventually succumbed 2-1.

“We came in here, no one gave us a chance coming in, and we laid it on the line and we almost made it happen,” said senior goalie Ryan Shea who put in another impressive performance with 39 saves.

Shea added, “We’re definitely here and we’re ready to play every game. They’re a great team but we can definitely play with them.”

The Panthers were the aggressors from the opening face-off and just four minutes into the game senior Alex Campbell had a chance from point-blank range, but could not lift it over a sprawling Kyle Casey, Malden Catholic’s sophomore goalie.

After being on the back foot at the start of the game (one shot in the opening five minutes of the game), the Lancers had a flurry with four minutes remaining in the first. Northeastern University-commit Matt Filipe sent a shot from the slot just wide and then Jake Witkowski rattled the crossbar.

Franklin continued to move the puck well, especially on the top line of Ryan Spillane, Joe Bourque, and Alec Borkowski. With justg 30 seconds left in the first, the trio created a great scoring opportunity, but Borkowski was not able to find the open net.

“That first period was the way that we’d like to play for three periods,” said Franklin coach Chris Spillane. “Unfortunately tonight, they’re a fast team and the ice got tilted a little bit after the second and third periods and we just couldn’t fight back.”

He continued, “We have two ways to regroup and come back and see if we can play 45 minutes of hockey not just 15 or 20.”

Franklin took the lead 1:06 into the second. Nick Downie played a perfect pass from behind the net to a wide open Campbell and the senior made no mistake as he roofed his shot to make it 1-0.

The goal seemed to spark the Lancers into life and MC spent the majority of the second period in the offensive zone. The Lancers put 19 shots on goal in the second and the only thing that kept them at bay was the outstanding effort of Shea. The senior had one remarkable sequence when he somehow shot a left pad out to kick away what seemed a sure goal and then seconds later dove down to his left to glove a shot that seemed destined for an open net.

“I was definitely in the zone there,” said Shea. “I’m just trying to keep the puck out of the net any way I can and luckily I was able to get a glove on that one.”

Spillane remarked, “He’s been doing it all year. You need a goaltender like that to stay in games and we’re going to need him on Wednesday night to play the same game. We need a ‘W’.”

Malden Catholic had momentum and would tie the game with 4:40 remaining in the second after a scramble in the crease. Shea made a couple of saves, but eventually it was punched home by Nick Botticelli. The Lancers carried that energy into the third and early in the period took their first lead when Filipe finished off an assist by Austin Goldstein.

“They’re running three lines, they’re fast, and you could see that our guys were running out of gas,” said Spillane. It’s a learning curve for us. We’re not here to lose; we’re here to win but we clearly know now what we need to do to compete at that level.”

After the come from behind heroics of the play-in game against Xaverian, Franklin was far from done. Borkowski would get a shorthanded chance on a breakaway only to have the puck slide off the blade after he pulled it past Casey and then seconds later had another breakaway, but he could not get his shot past the goaltender.

With 2:55 left, he had another chance that was again denied and left the senior forward with his stick on his helmet in frustration as he skated to the bench.

“Obviously those breakaways you’d like to have those back and maybe score on one of those,” admitted Spillane. “I think the difference came down to the defensive zone and the turnovers that we kept giving right back to them. We weren’t chipping it out of the zone; we were putting it right back on the defensemen’s sticks and it was a firing range for a while.”

Despite being a heavy underdog in the series and a neophyte in the Super 8, Franklin was not settling for moral victories. The Panthers were confident that they could force a decisive third game.

“We feel good about ourselves,” said Shea. “We feel like we played a great game and we just have to come back and do it over again and maybe capitalize on a few more chances.”

Franklin and Malden Catholic will face-off again on Wednesday night at the Tsongas Center at 8 p.m.