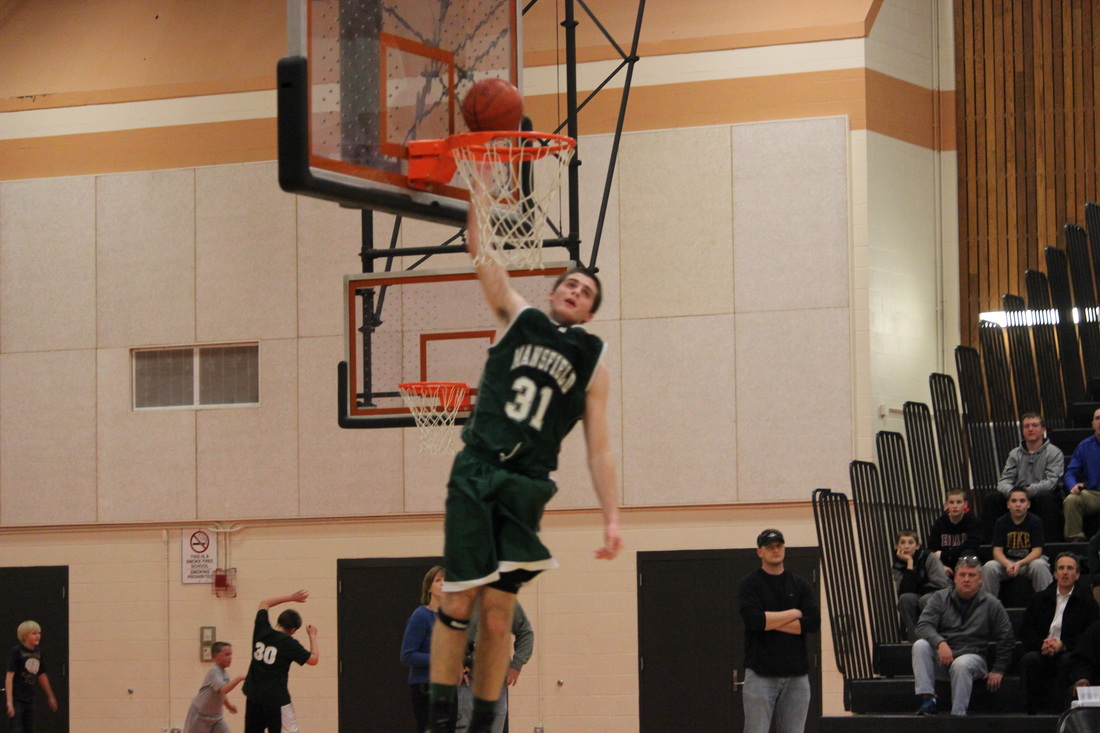 “It was a good win,” Mansfield head coach Michael Vaughan said. “I’m happy with the way we played. Taunton plays a very similar style defensively as New Mission and I was disappointed with the way we responded offensively to New Mission so tonight I’m kind of glowing a little bit that we were able to respond and absorb their physical play.”

Hill shot an impressive 10/13 from the field and added 9 boards. His eight third quarter points – highlighted by a two handed jam through traffic – helped the Hornets turn a halftime deficit into a three point lead at the end of three.

“I think we’ve been just drilling on offense really hard in practice lately,” Hill said. “We’ve been getting good movement, which we’ve been missing. Once that gets going everything kind of flows together. We can shoot the three but layups are obviously more consistent so we’ll choose that over three’s any day.”

After a competitive first quarter, Mansfield took a four point lead into the second frame. The Hornets led for the entire quarter until Taunton’s Shaq Davis hit a free throw with under a minute to play to give the Tiger’s a 1-point lead at the break.

After Hill’s dunk, Davis hit another freebie to make it 37-35 Taunton before Mansfield senior Cole Cummings’ put back layup tied the game. On the ensuing play, Cummings pick pocketed the ball and took it in for an easy two to give Mansfield their first lead of the second half.

The teams traded leads before sophomore Ryan Boulter – who came into the game as Mansfield’s leading scorer at 14.3 PPG – made his mark.

Boulter was just 1/6 from behind the arc before taking the ball and nailing a straightaway three for a 44-42 Mansfield lead. Boulter came back down and hit another three on the next trip up the floor and the Hornets never surrendered the lead.

“They have that mentality – a shooter’s mentality, that’s really important,” Hill said.

Taunton didn’t go without a fight, though. With Mansfield up 49-47 early in the fourth quarter, sophomore Michael Boen made a three for his first bucket of the game. And as Mansfield extended their lead, junior Kyle Wisnieski took the ball straight to the rim to give the Hornets a 60-51 lead – their largest of the night.

“We just have so much depth on our team and that’s what sets us apart from the others,” Hill said. “We can call on any guy and they will make a big play on any given night.”

Taunton continued to try and claw back late in the fourth, going on an 11-5 run that put them within three at 65-62, but Mansfield was able to inbound the ball and Hill was able to get one at the charity strike. On Taunton’s ensuing possession, they were unable to muster up a play, throwing the ball away just steps after getting over half court.

Taunton will look to get back on track on Friday when they host Kelley-Rex rival Attleboro. Mansfield will host Franklin – the team that eliminated from the postseason last year. Both games are at 6:30

As it seems to be every game, Mansfield point guard Rocky DeAndrade is getting better. Sometimes it’s with his ball movement and others its with his defense. 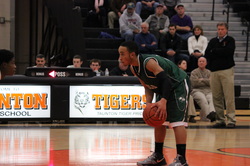 Ryan Lanigan/Photo
Tuesday night, it was his scoring – something Vaughan has been looking for since the first game of the season against Sharon.

“We’ve got to get [Rocky] shooting the floater a little bit in the lane because he’s a little too unselfish at times,” Vaughan said on December 14th.

The junior scored a season-high 16 points – via his soft touch in the lane – and helped keep Mansfield in the game early with 11 points in the first half.

“Coach is always saying, ‘Don’t be so passive. Look around for your teammates, but if that shots there, you need to take it,’” DeAndrade said. “I just looked for my shot a little more tonight.”