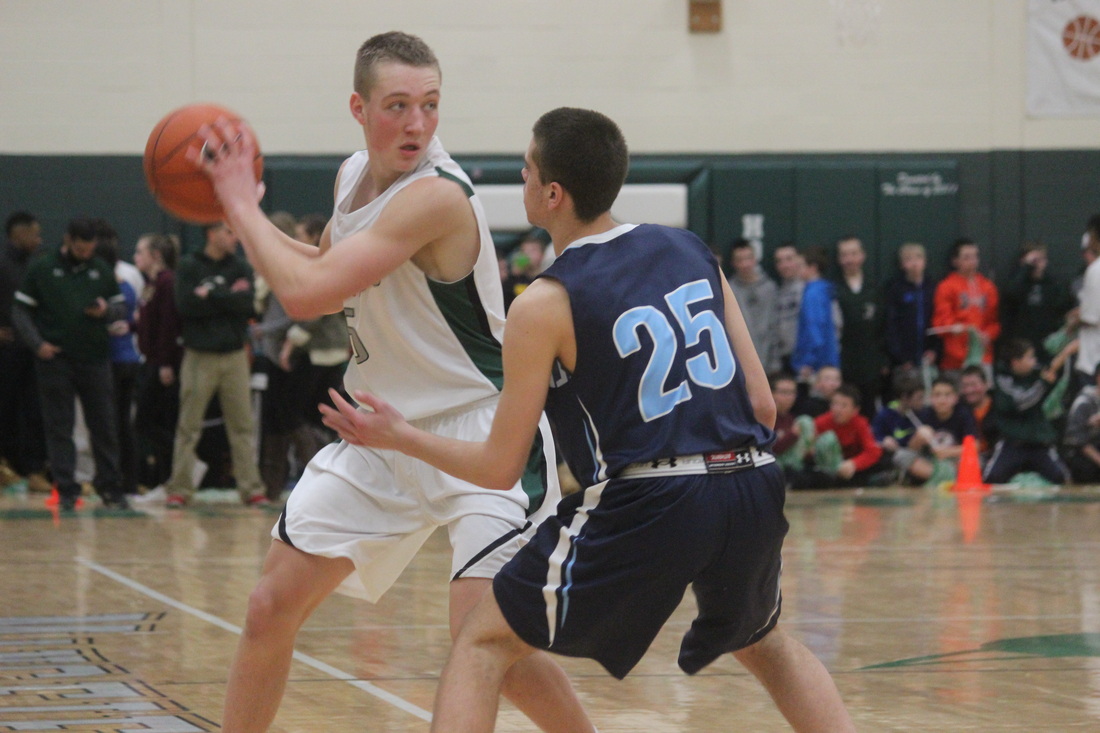 Mansfield’s Michael Boen is guarded by Franklin’s Dylan Reno in the second half. (Ryan Lanigan/HockomockSports.com)
By Ryan Lanigan, Editor-in-Chief

MANSFIELD, Mass. – Mansfield didn’t come out with the intensity and execution they were looking for in the first half.

But they sure did to start the second half.

The Hornets turned a four point deficit at the break to a 10 point win over rivals Franklin, 61-51, and claimed their third straight Hockomock League Kelley-Rex Division crown.

“In the locker room, I challenged the kids,” Mansfield head coach Michael Vaughan said. “Offensively we weren’t doing what we wanted to do so I told them lets just move, chip away, be aggressive and be better on both ends of the floor and I think the kids just took it to heart. You can’t say enough what Franklin did – in both games. They did a great job of executing and following a game plan. If we played them ten times, we’d go 5-5.

“Franklin did a great job with the X’s and O’s, taking things away, making us make plays. I just thought it was just a really well played game between to very good teams. I’m just glad we don’t have to see them anytime soon. If we see them again it will be in the state championship and I think we’d both be OK with that.”

The Hornets were able to create a five point lead in the first but Franklin closed it to just one, 12-11, heading in the second quarter. Franklin was the dominate team in the second quarter, hitting over 50% of their shots from the field and going 50% from deep. Marcus Giese had six of his team-best 12 points in the quarter and Tim Prunier had five of his nine points in the period.

The Panthers lead was just one as time ticked towards halftime, but a step over followed by a pull up three from Markus Bohmiller (10 points) sent Franklin into the locker rooms up 31-27.

But that would be Franklin’s last lead of the night.

The Hornets came out buzzing in the second half, starting off with a 14-3 run over the span of the first 4:17 of the third to make it 41-34 in favor of Mansfield.

Franklin got to within three at 41-38 after a bucket from Shawn Hanley and then go it to within two at 44-42 after two free throws from Prunier,

But five straight points from the game’s top scorer Nick Baskin (18 points) – a three on an assist from Matt Ehrlich – and then a pull up 12-footer – extended the lead to nine. Ehrlich finished off another basket, assisted by Ryan Boulter  to make it 51-42.

Hanley converted again on the other end again but two free throws from Michael Boen pushed the lead back to nine. Bohmiller brought the deficit to seven with a mid-range jumper from the baseline but on the other end, it was reserve forward Kyle Swansburg who took the ball to the basket hard for two to give Mansfield the momentum back.

“We got some contributions out of the other guys too,” Vaughan said. “Kyle Swansburg played great, he’s had limited minutes but he had a great matchup and played tremendous. Sam Goldberg played well and Nick Baskin played great after struggling shooting for a couple weeks. I’m just happy with the overall team effort and the energy we had.”

Franklin got one free throw on the ensuing possession to cut it to eight, but Boulter sank a three pointer – his first since the opening quarter – on an assist from Boen to push the lead to double-digits with 2:43 left and the Hornets never looked back.

“I think that all the things we did to limit to in the first half, we didn’t do [in the second],” Franklin head coach CJ Neely said. “They are a team not a team you give second chances too, you have to make them earn everything. Second half, it felt like the offensive rebounding really killed us. Baskin made some big plays, you have to give him credit. I thought we did a good job on Boen and Boulter for the most part. We wanted to make them shoot two point shots but I don’t think we rebounded well on either side of the floor.”

“It’s tough when you cover a kid like Ryan Boulter and you have to chase him around or a kid like Boen who can do so many different things,” Vaughan said his side wearing down the Panthers. “I thought those two started to wear them down defensive and that opened some things up for others. We were very patient and deliberate in what we were trying to accomplish. Instead of just two or three passes and a shot, we were getting deeper into seven, eight, nine passes and then we’d score and that’s a dagger.”

Boen, who now holds Mansfield’s “Stat Stuffer” record (points, rebounds, assists, steals, blocks and charges taken combined), had no problem filling up his stat line on Friday. He finished with 13 points, 10 rebounds and six assists. Boulter finished with 15 points and five rebounds, while Ehrlich, just a sophomore, had seven points and seven rebounds.

It was Ehrlich who assisted on Baskin’s big three in the beginning of the fourth quarter and then it was Ehrlich that collected an offensive rebound shortly after and scored on his own to make it 51-42.

“He’s been playing tremendous,” Vaughan said of Ehrlich. “He’s kind of sliding under the radar right now. Every game he’s chipping away with five or six rebounds, a couple assists, not turning the ball over, hitting a key shot. He just keeps going and makes a big difference for us.”

The Panthers shot nearly 42% in the first half from the floor but finish shooting just over 36%, including going 0/7 from downtown in the second half.

“A couple layups, a couple open threes we just didn’t make but our guys played hard, I’m proud of them,” Neely said. “It sucks, obviously we want to win the game but what you saw was two evenly matched teams, they beat us once and we beat them once. We had a hiccup [against Oliver Ames] early in the season and thats the difference in the league unfortunately. But this was a good game to prepare us going forward in the D1 Central.”