MILFORD, Mass. – Milford senior Shannon Smith is used to making the headlines, with 26 career no hitters, 8 perfect games, and a state championship under her belt.

But Smith outdid herself once again, picking up career strikeout number 1,120 in the fourth inning to break the Massachusetts strikeout record.

Needing four strikeouts entering the game, Smith picked up two in the second inning and tied the state record at 1,119 in the third inning. She forced a pop fly to start the fourth, followed it up with a hit batter, before getting Marlborough’s Victoria Petrie swinging for the state record.

“I was pretty happy,” Smith said with a smile. “Their original approach it seemed was to bunt so they wouldn’t strike out. I was wondering if they were going to have that approach all game but pretty much after the first inning they ditched approach and tried something else. Then I was able to get the strikeouts after that.”

The previous record was held by Shawsheen’s Jen Elwell, who graduated in 2004. Smith struck out 12 in the 2-0 win over Marlborough to bring the state record to 1,128 – and counting.

“Shannon Smith has put in the work in the offseason for a number of years leading up to this point,” Milford head coach Brian Macchi said. “For her to now be the all-time strike out leader in Massachusetts, she deserves it.” 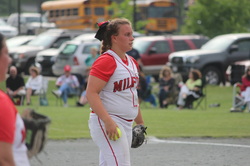 Smith has one more regular season game against Shrewsbury to add to the record and then will start the playoffs next week.

“I would probably say movement,” Smith said of what makes her such a good strikeout pitcher. “Speed can get strikeouts for a couple innings but once they adjust to speed, strikeouts are hard to come by. Movement is probably one of the more crucial parts of it. The more the ball moves, the harder it is to get the bat on it.”

And despite becoming the state’s best strikeout pitcher in terms of records, Smith still hasn’t reached her preseason goal.

“At the beginning of the season, we didn’t really know what the actual record was,” Smith said. “My goal was to get 1,200. That’s still my goal, I still want to get that.”

After Smith picked up the record in the top of the fourth in a scoreless game, she led off the bottom half with a single. Sarah Jaques came in as a courtesy runner, advanced to second on a Caroline Fairbanks single, and scored the game’s first run on an RBI-single from Taylor LeBrun.

After Smith struck out the side in the top of the fifth, Milford doubled their lead in the bottom half. Lizzie Stallone led off with a single and stole second. She made it to third on a Sam Bonvino ground out. Lauren Hanna’s bunt single then scored Stallone to make it 2-0.

Milford will go for their 20th win of the season on Saturday when they host Shrewsbury in the regular season finale.