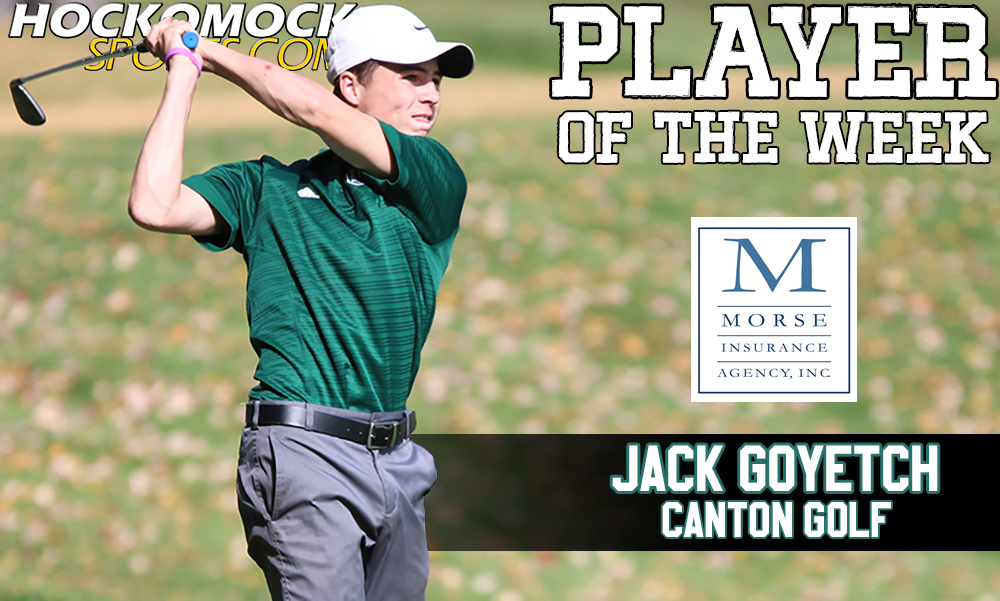 Canton senior Jack Goyetch has been selected as the HockomockSports.com Player of the Week, presented by Morse Insurance, for Oct. 1 through Oct. 7. Goyetch is the fifth player selected for the 2017-18 school year, first golfer chosen this season, and second Canton athlete to have been named Player of the Week this year.

Goyetch shot three medalist rounds this week (twice setting a new career-best round), propelling Canton to three wins and continuing the perfect start to the season for the now 8-0 Bulldogs. With its three wins this week, Canton also booked a place in the state tournament for the eighth season in a row.

“Jack is a great golfer and has a great golf mentality,” said head coach Mike Barucci. “He doesn’t let a bad shot or a bad hole turn into a bad round. He is a great leader and a great role model for everyone on the team.”

The week started on Tuesday with a career-low round of 1-under par 33 at Blue Hill Country Club, lifting Canton to a 139-173 win over Sharon. On Wednesday, Goyecth was the medalist with a round of 41 at Foxboro Country Club in a 173-181 win against the Warriors.

He capped the week with another career-best round at Blue Hills. On Thursday, Goyetch shot a 2-under 32, one of three Canton golfers that set new career marks while beating Attleboro 141-161.