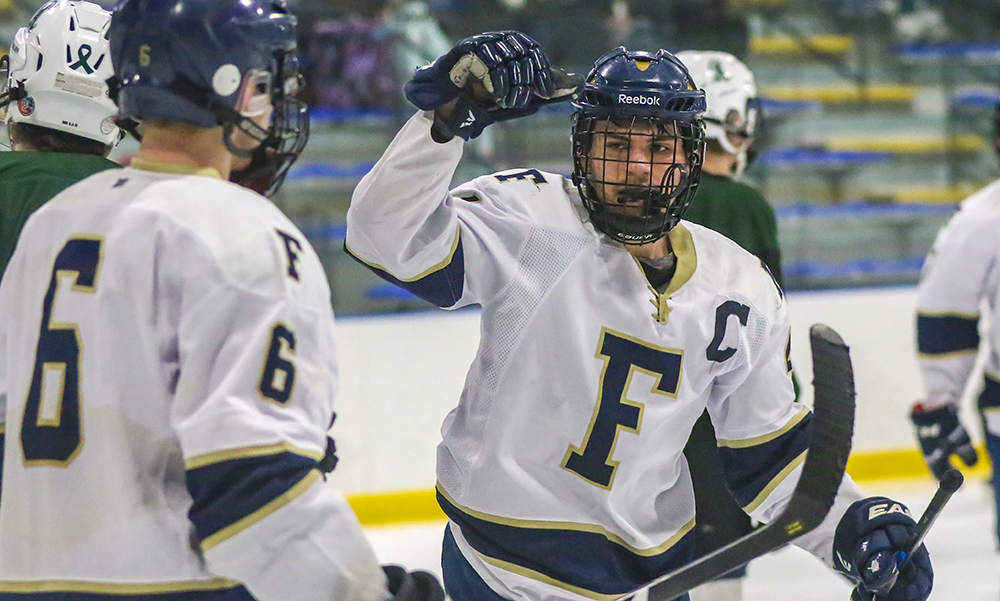 CANTON, Mass. – With the state tournament right around the corner, the Foxboro boys hockey team seems to be clicking on all gears.

The Warriors closed the regular season out in impressive fashion, skating to a dominant 4-1 win over Abington, a team Foxboro could potentially see in the Division 3 South tournament next week.

“We’re playing with the team speed we know we have, we’re using it to our advantage. All of our lines are playing well on both ends of the ice. We needed to work on picking guys up in transition coming back, and we’re doing a much better job with that back check.”

After an up-and-down 1-3-1 start to the season, the Warriors have suffered just one loss in the last 14 games (2-0 to Canton), and are undefeated in their last 10 contests (7-0-3). The win over Abington, who entered the contest with the same amount of points as Foxboro, will likely give Foxboro a home game in the tournament without playing in a preliminary game.

While controlling the first period, the Warriors didn’t have anything to show for it, despite a 15-6 edge on shots on goal through the first 15 minutes. Junior Ryan Sullivan had a chance in the opening minutes, batting at a loose puck after Kyle McGinnis had a shot from the blue line saved.

But the biggest moments for the Warriors came shorthanded as Foxboro had to kill a pair of man-advantage chances for the Green Wave. Going on the power play just under five minutes in, Abington had just two saves, both handled by Espen Reager (18 saves). McInnis came up with a big clearance and senior Sebastian Ricketts was a menace on the forecheck, hampering Abington’s efforts to break out.

The Green Wave went back on the power play with 4:13 to play in the first but it was more of the same from the Warriors’ defense. Reager made a strong reactionary stop on a shot from Michael Pineau before Foxboro pushed up ice, Ricketts again setting the tone by applying pressure and drawing a penalty to make it 4-on-4.

It didn’t take long for Foxboro to find the back of the net in the second period. The Warriors went on the power play 12 seconds into the frame and cashed in with just seconds left on the man-advantage. Sophomore Eoin Reager tried to center the puck but it was blocked right back to him and this time he took it himself, tucking it just inside the post for a 1-0 lead with 12:57 left in the period.

“We knew once we got that first goal, it just gave us the momentum and confidence,” Cedorchuk said. “We were outplaying them and the time of possession was in our favor so we just needed to get the first goal. We’re definitely happy with how we’re playing going into the playoffs.”

The lead last just over two minutes as Abington’s Dave McAruther used a nice move to get the puck on his backhand in front and lifted in the tying puck with 10:45 to go in the period.

But the Warriors were quickly back on the attack and took the lead before the end of the period with another power play goal. With sophomore Jack Watts battling in the corner, Leach skated over and picked up puck free, skating towards net and firing a shot into the top corner for a 2-1 lead with 3;48 to play in the second.

“We had a lot of shots yesterday [against East Bridgewater] so we’re creating a lot of offense,” Cedorchuk said. “I like the way the guys are finishing, we’re really playing well behind their defensemen.”

Foxboro nearly tacked on another tally before the end of the period but sophomore Ben Ricketts had a pair of chances denied by Abington’s goalie, and then another chance after a scrum knocked down by a defenseman in front of net.

Leach was the catalyst for the next goal, helping Foxboro take its first two-goal advantage in the game. He pounced on a loose puck and skated behind net, abruptly stopping and changing back to the direction he came from. He picked out Ronnie MacLellan in front, who squeezed his shot five-hole for a 3-1 lead with 11:04 left in the third.

Abington once again went on the power play but the Warriors were up to the task, getting their third kill of the game. Sophomore Matt Grace interrupted a pair of passes, leading to a clearance from McGinnis. The Warriors even had the best scoring chance during the stretch as Leach had a wrist shot denied after a nice clearance from Eoin Reager.

Foxboro tacked on another insurance goal with 4:35 to play as Alex Coviello fired a shot on net that deflected off the goalie and an Abington defenseman, eventually popping free in the slot and Leach was first to it, blasting a shot into the back of the net with the goalie turned around from the scrum.

“We didn’t let them get back into it, didn’t let them get any confidence,” Cedorchuk said. “It was a good third period to see, we definitely keep the pedal to the metal so to speak, just kept coming and put a lot of pressure on them until the end of the game.”

Foxboro boys hockey finished at 10-4-5 and awaits tournament seeding, which will be released on Friday morning.