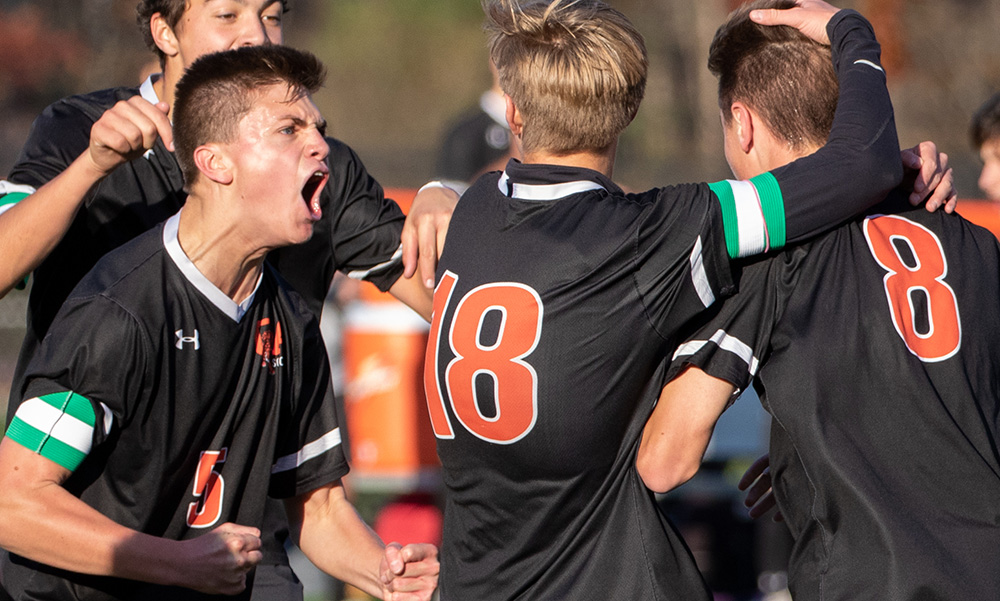 NORTH EASTON, Mass. – Oliver Ames head coach John Barata admits there aren’t many positives to falling behind early in a tournament game, but there was one thing the Tigers learned about themselves on Sunday afternoon.

“It showed our ability to come back,” Barata said.

The fourth-seeded Tigers fell behind twice in the opening half against visiting Greater New Bedford but answered each time, and then some, on their way to a dominant 6-2 win over the 13th-seeded Bears.

“If it happens again, we won’t be panicked,” Barata said of the lesson learned from the win. “Ideally, we won’t want to go down but if we are, it was good it was early in the game because you have plenty of time and you don’t have to change your plan. We didn’t change our game plan.”

The visitors stunned the Tigers by taking the lead less than three minutes into the game. A long ball over the top from GNBVT defender Alexander Vieira Silva Macedo fell in behind the OA defense, drawing the keeper off the line. Landon Amaral won the race to the ball though, nodding a header past the keeper and into the open net.

But as Barata noted, the Tigers didn’t change their plan and their offense answered. The hosts knocked on the door plenty of times before breaking through. Kevin Louhis forced the keeper into a terrific diving game in the 5th minute, and Colin Milliken had his curling shot handled in the 7th minute.

The pressure paid off in the 16th minute as Milliken intercepted a pass from the Bears just over midfield. After a touch forward, the junior midfielder played a perfect through ball between the GNBVT defense that Louhis to run onto and finished at the far post to make it 1-1.

Despite the hosts having the majority of play, the Bears took another lead. Another ball over the top found space in behind the defense, Amaral took the service down and tucked in a low shot to put GNBVT back in front, up 2-1 in the 24th minute.

“We got a little panicky early and we didn’t play our brand,” Barata said. “Credit to [Greater New Bedford], they came prepared to play that long ball. They didn’t have a lot of shots, they used that long ball. Once we tightened up the backline, everything was better for us.”

Similar to their response after going down the first time, Oliver Ames was back on the offensive nearly immediately. Junior Brady deVos’ long shot was deflected that gave Louhis a chance with a header in the area but it was right at the keeper in the 26th minute.

OA pulled level four minutes later as right back Harry Ahearn connected with Dillon Cupples near the top of the box. Cupples had his bid blocked by a defender but the ball fell right to Jimmy Keane, who latched onto it with a low blast into the back of the net to make it 2-2 in the 30th minute.

This time the Tigers took advantage of their momentum, earning a free kick from 25 yards out. Junior Matthew Nikiciuk blasted a right footed past the wall and into the far corner to give the hosts their first lead of the game, up 3-2, in the 31st minute.

“I hope the guys felt reassured they could come back,” Barata said. “Once we got the lead, we definitely we weren’t going to give it back. The key was the get the goals and then be disciplined enough to not give another one back.”

The second half was all Tigers, who put on a clinic in the final third over the course of 40 minutes. Peppering the net with 10 shots on goal, OA cashed in for three more goals.

But before the OA offense could get in full gear, the defense came up with a big stop. Dominek Borden flicked a header off a throw in that eluded the keeper but defender Jonathan Freeman made the stop with a header before the ball could cross.

Cupples doubled the hosts’ lead in the 59th minute. After having his pass blocked by a defender, the ball popped up and Cupples blasted a wicked volley from 25 yards out that dipped under the crossbar for a 4-2 lead in the 58th minute.

Two minutes later, Louhis played Anthony DaCosta in with a through ball. DaCosta took a touch to cut the ball back onto his right foot and blasted a shot near post top shelf that gave OA a 5-2 lead.

The Tigers’ grabbed their third goal in a six-minute span when Mathias Taylor blasted a shot from a step inside the box that was saved, only for Louhis to race in and bury the rebound.

“It’s a great time of year to have these chances and have the ball go into the back of the net,” Barata said. “Hopefully we have many more to come. Greater New Bedford did a great job, we knew it would be a tough game. Sometimes that first [playoff] can almost be the toughest. It’s not always the toughest, I can’t really explain it, but you want to get that first one. Our journey is tough, we’re in for a battle next time out with either Somerset-Berkley or North Attleboro.”

Oliver Ames boys soccer (14-3-0) will host the winner of #5 Somerset-Berkley and #13 North Attleboro with a date and time still to be determined.

STOUGHTON, Mass. – The visiting Greater New Bedford Bears came knocking on the door twice, including with the game on the line, and both times, the Black Knights slammed the door shut.

The visitors, seeded 12th in the MIAA D2 South tournament, tried on a pair of occasions to score on aggressive base running moves, but on each occasion, Stoughton junior catcher Mike Nazzaro and senior pitcher Zak Paqeutte denied the Bears, including on the last play of the game to secure a 1-0 win in a First Round matchup on Anthony Novello Field.

The fifth-seeded Black Knights took the lead into the final inning, putting the pressure on the visitors. Paquette (7IP, 3H, 2BB, 2HBP, 5K) hit the first batter he faced before getting a fly ball to center for the first out. A passed ball allowed pinch runner Cam Barton to take second, and a ground out advanced the runner to third. Evan Mello drew the first walk of the day against Paquette to put runners on the corners.

GNBVT’s Payton Leandre battled to draw a second straight walk that would have loaded the bases. But ball four was bobbled at the plate and Barton took off for home. Nazzaro quickly recovered and scooped the ball to Paquette and Barton retreated and tried to head back to third. But the Black Knights had the runner caught in a pickle and Paquette tossed to third baseman Brady Conlin and the sophomore applied the tag to end the game.

“That game was one play away from maybe going another direction so it was nice for the boys to hold on,” said Stoughton head coach Mike Armour. “Zak was obviously huge for us today, set the tone early. He was hitting the zone, challenging those guys. We talked about really challenging them and making them earn everything, I’m not sure how many walks he ended up with but not many.

“Hats off to Greater New Bedford, their guy pitched a good game. But we need to do a better job offensively, I felt like we had guys on base early just couldn’t get them in and that could have changed the game early. We let them hang around and anything can happen, and it almost did.”

Nazzaro and Paquette combined to deny the Bears of another run with a play at home. Leandre singled in the bottom of the fifth with his side trailing 1-0 and moved to second on a sac bunt from Jack Gifford. With leadoff man Ethan Almeida at the plate, a wild pitch got back Nazzaro and went to the backstop. Leandre sprinted to third but didn’t slide in, instead rounding the base and taking off for home without hesitation.

Paquette, who was halfway between the mound and plate, noticed and quickly sprinted home and Nazzaro fielded the loose ball and hit Paquette, who applied the tag for the third out of the inning.

“Fantastic plays,” Armour said. “And even Zak looking like he wasn’t covering the plate. He was locked in from the second he got here today so I don’t think he thought he was going to go and when he did, it was like OK, thanks for coming. I think it affected them on the bases going forward too.”

The lone run of the game came in the bottom of the third inning. Paquette clubbed a one-out single and it looked like the Black Knights would have runners on first and second when Robbie Seaman was hit on the back by the pitch. But halfway down the line, the home ump ruled Seaman didn’t make an attempt to get out of the way of the pitch and the at-bat continued.

Instead of first and second, the Knights had runners on the corners as Seaman smacked a single through the right side. Junior James Genest hit a fly ball deep enough to left field to allow Paquette to scamper home for a run on a sacrifice fly.

“In my eyes, he was hit between the 2 and the 1 so I’m not sure how he’s supposed to get out of the way,” Armour said. “But we took advantage of the situation. Umps are doing the best they can, it’s not easy. We don’t want to make excuses, we’re not shrugging our shoulders, we’re not complaining…you have to overcome.

Stoughton had someone reach base in four other innings, and get into scoring position each time, but couldn’t cash in any further against GNBVT starter Angel Quinones Gonzalez. Paquette walked in the first and stole second but back-to-back strikeouts stranded the runner there.

Nazzaro was hit by a pitch to lead off the second and an error on a hard hit ground ball from Jacob Kaplan moved him to second with one out, but Stoughton could only manage a pair of fly balls and no further damage.

Cian Swierzewski put the pressure on the Bears’ defense, beating out an infield dribbler and taking second on a throwing error but three straight soft line drives stranded the run there.

And in the fifth, Seaman had a two-out single, stole second, but was caught at third trying to swipe another bag.

“I didn’t think we hit the ball the way we are capable of hitting, but that’s baseball that’s going to happen. And you’re going to have some physical mistakes, that’s part of the game. But I think we did have some mental mistakes.”

Stoughton advances to the D2 South Quarterfinals and will host a familiar foe in division rival Milford, the 13th seed. The Scarlet Hawks knocked off #4 Southeastern in their opening contest. Milford beat Stoughton, 3-2, at Fino Field at the end of April but the Black Knights clinched the division title with a 6-3 win in mid-May at Novello Field. Stoughton will host Milford on Monday at 4:00.