With little more than three minutes remaining in Monday night’s game and UMass Dartmouth leading Salem State by 28 points, former North Attleboro star Megan Ronaghan caught a pass at the three-point line and faced up to the basket. A dribble towards the right elbow, a pump fake, and then a lean into a jumper drew a foul.

On another night, Ronaghan, the reigning Little East Conference Player of the Year, probably would not have even been in the game at this point, but with her team’s win in hand the junior forward was looking to make a little personal history.

She stepped to the line and knocked down both free throws, giving her 21 points on the night and 1,001 in her remarkably successful 2-1/2 seasons with the Corsairs.

“I actually never thought I’d get 1,000 points in college,” said Ronaghan in an interview hours before the game against Salem State.

“My senior year in high school, I had a really had a standout season but I couldn’t get to 1,000 but it was obviously something that was in the back of my head,” she continued. “Getting it in college is just a whole other level and doing it so early…it’s important to me.”

Ronaghan became the 10th player in program history to reach the 1,000-point plateau and also the fourth player in the past four seasons. Coming off a Player of the Year season, Ronaghan was tabbed as a potential All-American in the preseason and is currently averaging 19 points and nearly seven rebounds per game, while shooting 48 percent from the floor.

She has been an instant hit in Dartmouth. She was named the New England Women’s Basketball Association and Little East Conference (LEC) Rookie of the Year while averaging 13 points per game as a freshman. That average jumped to nearly 18 a game last year and she was named first team all-conference for the second time.

“Not even halfway through her junior year to have the chance to break 1,000 points I think is special,” said second-year UMass Dartmouth coach Matt Ducharme, who was an assistant under former coach Megan Erbes when Ronaghan was recruited.

“To have the accolades she got as a freshman…she’s worked really hard for it and everything she gets she deserves.”

Ronaghan was not a player that has been tabbed as a star since the beginning of her career. She played some as a reserve during her sophomore season at North Attleboro, but it was not until her junior year that she emerged as a potential star. She credited current Attleboro coach Rick Patch for helping her during the off-season with her techniques and believing that she had the potential.

“He really guided me, taught me fundamentals that I hadn’t previously known,” said Ronaghan. “He really showed me my potential in the sport. He really shaped the player I became.”

After a solid junior year, Ronaghan dominated the league in her senior season and was named HockomockSports.com Player of the Year. She averaged more than 21 points and 10 rebounds per game in a league that was filled with standout power forwards, including her UMass Dartmouth teammate Alicia Kutil from Franklin.

By then she had drawn the eye of local college scouts, including Ducharme. “We went pretty hard after [Meg] in the summer before her senior year,” he said, adding that there was a spot opened up by the graduation of Colleen Moriarty, another 1,000-point scorer with Hockomock roots (Canton).

He added with a little chuckle, “She’s a special player. I don’t know that we knew it would be this special but we knew that there was something there.”

“And then the next game I scored like 23 and she was like okay maybe you could do something here.”

Last season, Ronaghan helped the Corsairs to a 19-8 record, 10-4 in the LEC, and a share of the league title with Eastern Connecticut State. She became only the second player in program history to be named the conference’s Player of the Year.

“I definitely felt like something was going to come out of the hard work,” she said. “I worked very hard to get that season I had my senior year. I was glad that it paid off.”

He added, “She has an unbelievable awareness around the basket, a quick first step (maybe sometimes too quick), but she’s got an uncanny ability of where the basket is when she’s got the ball in her hand and how to get it in.”

Heading into a season in which the Corsairs were selected as No. 2 in the LEC preseason poll, Ronaghan prepared herself for the rigors of basketball by playing on the school’s volleyball team this fall and led the team with 229 kills.

She started laughing when Ducharme was asked about his thoughts on his star player taking the court for the volleyball team. His wry reply: “I’m better now. She’s healthy so we’re good.”

The volleyball certainly has not affected Ronaghan’s game this winter. The Corsairs started the season 7-0 for the first time since the mid-1980s and, despite losing three of the last four including Saturday afternoon to Western Connecticut State, are now 8-3 on the season.

“I think our work ethic is one of the best that we’ve had since I’ve been here and I think that’s going to take us really far,” said Ronaghan. “We tied last year for the regular season champs and we want more and we want it now.”

“I have very high hopes for our season.”

On Monday night, she took a moment to celebrate with teammates, coaches, and family. One milestone down and many more on the horizon. 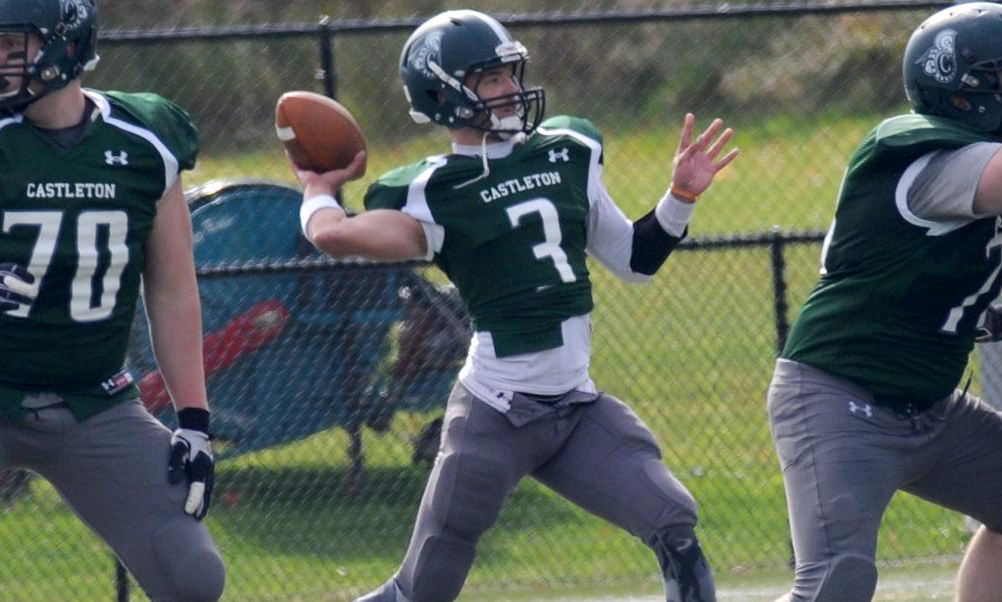