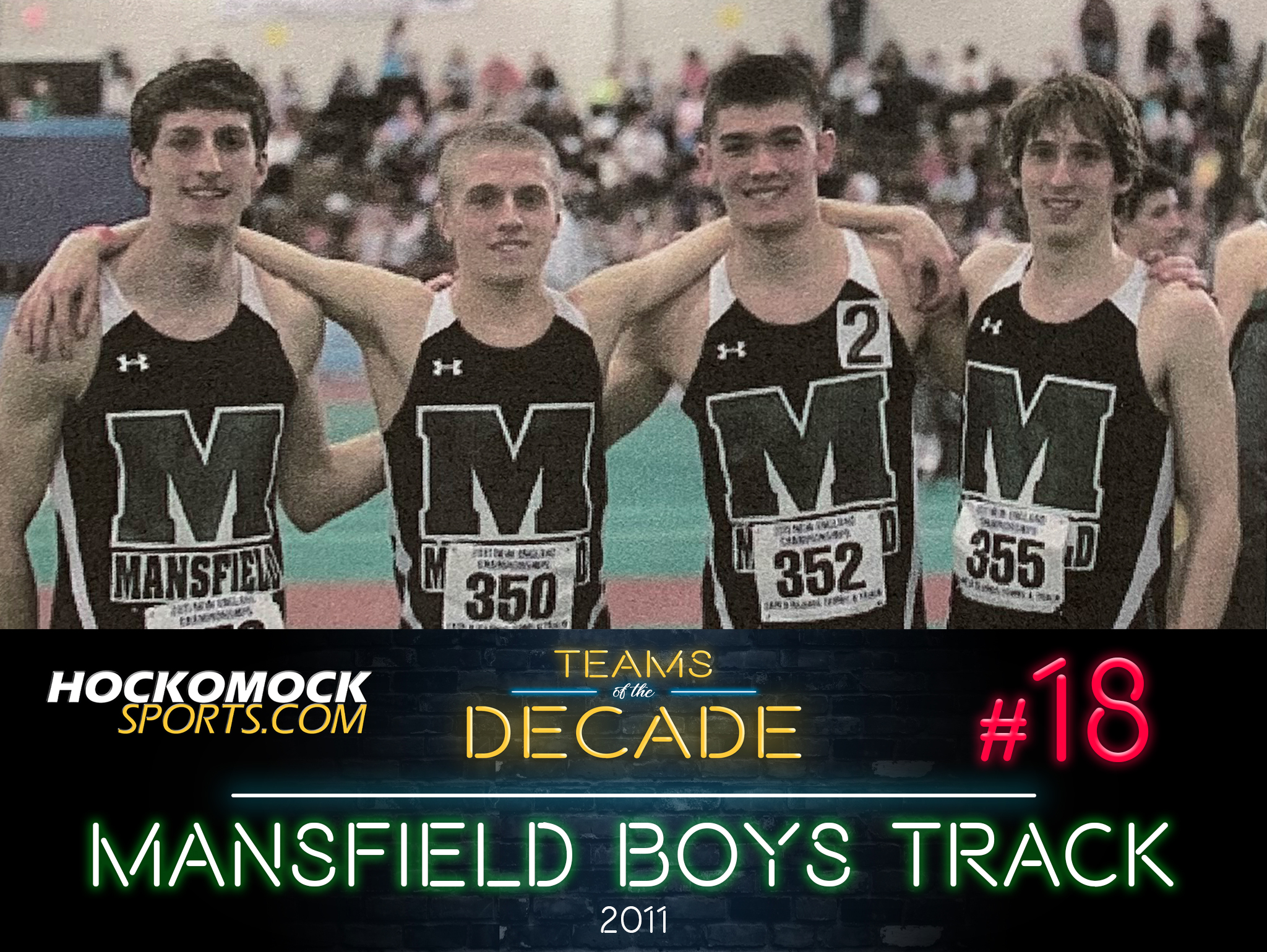 The Mansfield boys indoor track team has been the cream of the crop in the Hockomock League and beyond for the past decade, so it wasn’t easy to narrow it down to one squad. But it’s hard to ignore the success the Hornets had at the league level, the division level, and the state level in 2011.

That season, the Hornets set new program records in over half (eight) of the events they compete in during the winter months that season. And what really stands out above the rest is that six of those records still hold today despite the squad winning seven more league titles throughout the decade.

Mansfield cruised through the dual meet season, knocking off Franklin, Attleboro, North Attleboro, and King Philip in succession to claim the Kelley-Rex title. Also during the regular season, the Hornets competed in the Division 2 Relays meet at the Reggie Lewis Center and put on a show. Mansfield took first place overall as a team with 64 points — the second place team Central Catholic finished with 35 points — and won the 4×400 relay (3:24.99), the Distance Medley Relay (10:40.98), and set new program records in both the 4×200 (Steve Gannon, Nick King, Ian Caldwell, Greg Donahue – 1:31.82) and the sprint medley relay (Nick King, Steve Gannon, Griffin Robertson, Josh Lampron).

“The combination of the junior and senior classes was deadly!” said longtime Mansfield coach Julie Collins. “If you look at complete results of Hockomock League Meet, there were so many great athletes on the track and in the field events that no team in the state could compete. They supported each other and brought out the best in each other!”

The Hornets showed their mettle at the Hockomock League Championship meet, taking seven first place finishes and 18 total top-five placements on its way to a whopping 103.5 points. North Attleboro finished second that year with just over half of that total at 55 points. Senior Ryan Petrella and Griffin Robertson went 1-2 in the 600M at the meet and Steve Gannon clocked in at 35.54 to win the 300M and set a Hornet program record that still stands today.

The dominance continued at the D2 State Meet where the Hornets swept all three relay events, won a pair of individual races, had a dozen top-five finishes, and registered an incredible 98 points to win the event. Mansfield’s Josh Lampron won the 1 Mile (4:19.86), Shayne Collins crossed first in the 2 Mile (9:14.51) and the Hornets ended the meet by sweeping all three relays: the 4×200 (Ian Cauldwell, Greg Donahue, Nick King, Andrew Kuras) in 1:32.19, the 4×400 (Steve Gannon, Ryan Petrella, Jonah Primiano, Griffin Robertson), and the 4×800 (Shayen Collins, Kham Haleudeth, Josh Lampron, Nate Somes) in 8:10.44.

Mansfield saved its best for last at the 2011 All-State Meet at the end of February at the Reggie Lewis Center. Lampron once again won the 1 Mile race, this time setting a new program record that holds today at 4:15.16 while Collins, who took second in the 2 Mile, set the program record with a time of 9:09.33. Relays were once again a strong point for the Hornets, as the 4×200 group took third, the 4×800 team was second overall, and the 4×400 relay team of Steve Gannon, Ryan Petrella, Nick King, and Griffin Robertson won the event and set a third Hornet record at the meet, clocking in at 3:21.78. Mansfield won the All-State Championship meet with 50 points.