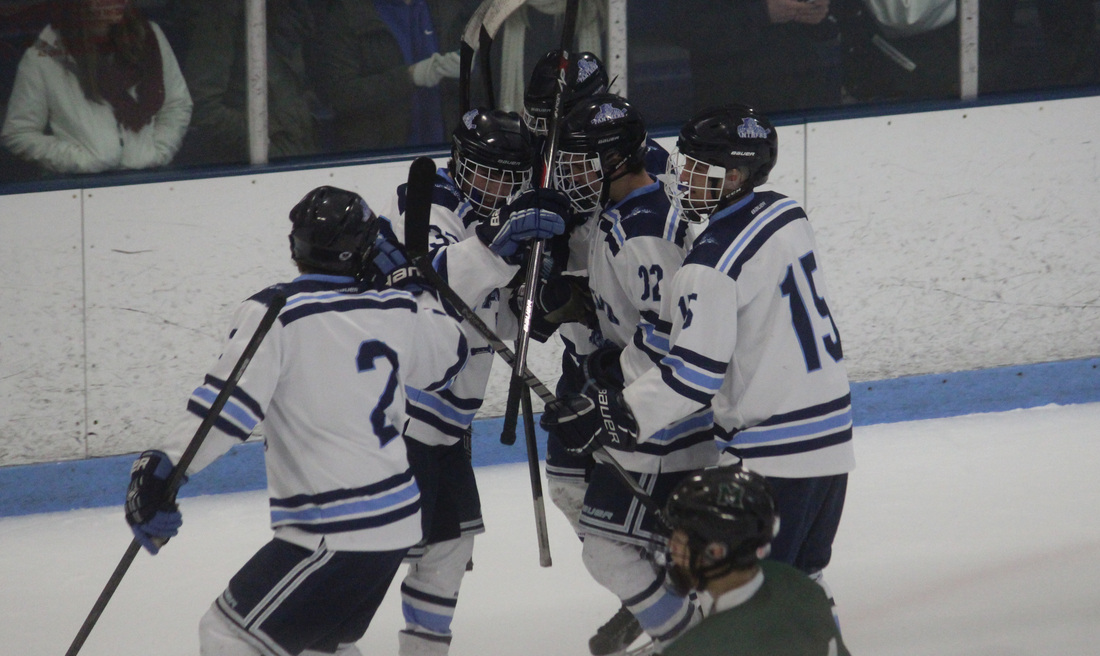 Franklin celebrates one of its five third period goals against Mansfield. (Ryan Lanigan/HockomockSports.com)
By Ryan Lanigan, Editor-in-Chief
FRANKLIN, Mass. – Franklin scored five goals in third period to runaway with a key 6-1 win over Mansfield in a Kelley-Rex showdown.

The Panthers looked like they were going to jump all over the Hornets when Ryan Spillane buried a rebound off his own shot just 40 seconds into the game to make it 1-0, but it took over 30 minutes of game time for Franklin to strike again.

“We came out flying early and I thought we had a really solid first period, we just didn’t have too many goals to show for it,” Franklin head coach Chris Spillane said. “In the second period. [Mansfield] came out flying, they took it too us. They took the wind out of our sails but we in the third we just had to move our legs again. I thought we did a good job forechecking, all four lines out there.”

Ryan Spillane opened the scoring after he carried a puck up the right side, fired a shot that was initially saved by Mansfield goalie Anthony Visconti but the rebound eluded the goal and Spillane tapped it home.

Both teams were able to survive two power plays in the first period while Franklin nearly doubled its lead on the penalty kill. Senior Joe Bourque rushed in, putting the puck through a defenseman’s legs before getting it on the other side but only to have his shot robbed on a glove save by Visconti.

After leading in shots 11-6 in the first period, Franklin was on the defensive in the second period. The Hornets nearly leveled things just 24 seconds into the middle period when a face-off win came back to Shane Piotti. Piotti ripped a shot that was deflected but Franklin goalie Ryan Shea made a huge pad save to push it wide.

Just three minutes later, Chad Piotti wrapped around the net and put the puck right in front to Pat Graham, who beat Shea five hole but the puck didn’t cross the goal line and was cleared away.

When the third period started back up, so did Franklin’s attack. After killing an early penalty, DJ Shea was able to keep a Mansfield clearance attempt in the zone and skated down to the corner. As he began to skate behind the net, he dropped the puck off for KJ Powers, who rifled a low shot into the back of the net to make it 2-0 with 12:09 left in the game.

From there, the onslaught was on.

Less than a minute later, Sean Cole’s shot was tipped by Nick Downie right in front of the net, but the puck bounced off Visconti’s head and behind the net. It didn’t take long from there for Franklin to cash in though. In the offensive zone, Powers look to be sending a hard low cross, but instead it bounced off a Mansfield defenseman and into the back of the net to make it 3-0 with 9:24 left.

“Sometimes they’re not pretty goals but you throw pucks on net and good things happen,” Spillane said. “KJ’s two goals were nice low shots and caught them off guard.”

Mansfield went on the penalty with 7:15 left after a slash and Franklin quickly cashed in. Just 25 seconds into the man advantage, Matt Daly found Alex Campbell in front and the senior buried his chance.

“We tend to rely on the first line for most of our productions and team pick up on that,” Spillane said. “I think we had four different lines score goals tonight which was great to see. We need to have that offensive output from all lines if we’re going to be successful.”

It didn’t stop there for Franklin. The Panthers went on a 5-on-3 after Mansfield took four penalties on one play with 6:18 to go. As one power play was coming to a close, the Hornets looked like they were going to dodge a bullet as they were able to clear a puck right off the goal line.

Instead, the clearance hit Franklin’s Nick Morris’ cage on his helmet and bounced right back into the net. Just a minute later, still a man up, sophomore Adam Assad pounced on a loose puck right in front and converted to make it 6-0 with 3:21 left.

“That’s why its a team sport,” Spillane said of having multiple lines contribute, including his fifth line. “When you look at the stats, teams will think if they shut down our top line they are in good position. Those were KJ’s first two goals of the year. No better time to score two goals than in a game like this.”

Mansfield went up 5-on-3 in the final three minutes and senior defender Evan Kershaw – who was a big reason Franklin was held to just one goal through two periods – sniped a shot to the upper corner to get the Hornets on the board.

Franklin (6-1-3) will be back in action on Saturday when they host King Philip at 8:30. Mansfield (3-5) will look to bounce back when they take on North Attleboro at the Foxboro Sports Center on Saturday at 7:20.