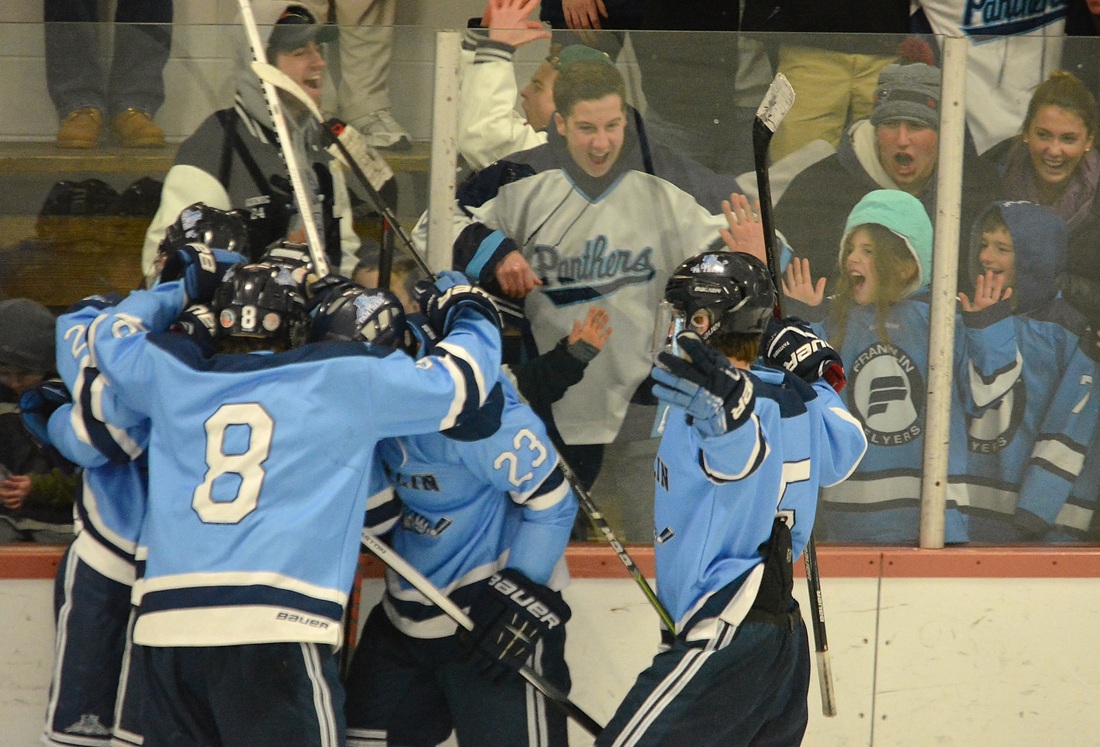 The Panthers celebrate with their fans after DJ Shea scored the eventual game-winner for Franklin in the third period. (Josh Perry/HockomockSports.com)
By Josh Perry, Managing Editor
CANTON, Mass. – As the buzzer sounded, the official behind the net emphatically pointed to the puck sitting in the back of the goal. Even as the clock read all zeros, Canton was given the lead heading into the third period.

The outrage on the visiting bench carried over into the locker room. But the Panthers, with 17 seniors on the roster, were able to get their focus back on the task at hand and came out of the second intermission set on turning around the deficit against their perennial rival.

Seniors Nick Downie and DJ Shea each scored goals and senior goalie Ryan Shea made seven of his 29 saves in the third period to help Franklin bounce back on Saturday night at the Metropolis Rink and pull out a 2-1 victory to sweep the season series with Canton.

“Mentally our kids had checked out saying that they screwed us and that wasn’t a goal,” said Franklin coach Chris Spillane, “and we had to get them back and refocus them and remind them that there’s 15 minutes of hockey left. They responded well.”

Canton had taken the lead at the very end of the second period. There was some confusion as the Bulldogs tried to clear the zone, but sophomore Shaun Kirby skated onto a loose puck and carried to the right circle. He then picked out a perfect pass to the stick of classmate Jerry Harding, who fired a one-time shot into the back of the net as the buzzer sounded setting off a raucous celebration.

“Jerry played very well,” said Canton coach Brian Shuman. “He was all over the ice and that’s the type of play that we expect from him. I think that was one of his best games of the season.”

The Panthers were furious, but stormed out of the locker room and only 2:06 into the third period a scramble in front of back-up goalie Sean Klimas fell to Downie. On the third rebound attempt, the senior punched the puck home and this time it was the visitors that had the chance to cheer.

Shuman said, “In the third period, it was a little disappointing to give up the equalizer that early and that’s been a theme of this year. It seems like the beginning and end of periods we’re giving up key goals and that’s got to change going forward.”

Klimas came into the game at the start of the second period because starting goalie Justin Slocum was sick. The senior goalie made 13 saves in the final two periods and dealt with the Franklin attackers putting pressure right on top of the crease. In third period he made a kick save to rob Alec Borkowski after the forward beat two defensemen on his backhand and kept the game tied.

“For [Sean] to come in unexpectedly and to play as well as he did to give us a chance was big,” said Shuman.

The game would stay tied inside six minutes remaining. DJ Shea forced a turnover in the Canton zone that fell to Connor Anderson at the blue line. Anderson slipped a pass between two Bulldogs to Shea, who skated in all alone and flicked his wrister just under the bar to give the Panthers a 2-1 lead.

“It was great seeing two guys get goals that hadn’t been on the score sheet a lot lately,” said Spillane.

Canton picked up a four-minute penalty seconds after falling behind. The Bulldogs would clear it off and go on the power play themselves with 1:25 remaining, but the final chance of the game was saved by Ryan Shea on a redirect byu Kirby at the edge of the crease.

It was the 29th and final save of another great performance by the Panthers netminder. It started in the first period when he stretched out a pad to stop a Kirby breakaway and continued early in the second when he flashed a blocker to rob Harding on another Canton break. He also denied Matt Lazaro and Kirby again in a 15-save second period.

“Their goalie stepped up again. He’s got our number for sure,” said Shuman.

“Our goaltender kept us in the game He stood on his head,” said Spillane. He added with a laugh, “We just need him to stay in the net. He comes out of the net and I get a little nervous but he’s the reason why we’re winning games.”

Right from the start both teams came out with energy and the forechecking that was missing from the first meeting, which Franklin won 1-0 but after which both coaches were unhappy with their team’s performance. This was the type of game — frenetic, end-to-end, and physical — that has defined the rivalry.

Shuman said, “The first game was ugly and a slugfest and this one had a ton of chances both ways and we played well they just scored one more goal than we did.

Spillane added, “Every time we play Canton there’s not a lot of time [on the puck] and you know that you’re going to pay the punishment.”
He continued, “It was a good two points…but we need to improve in our zone and there’s a lot of things to work on…Keeping the puck and cycling it around the boards isn’t going to get you goals and that’s what we did a lot of.”

Franklin (9-1-3) will continue its Hockomock schedule on Wednesday when it plays host to Stoughton. Canton (7-5-0) will try to bounce back on Wednesday with a trip to Attleboro before a make-up game with Oliver Ames on Thursday.

Josh Perry can be contacted at JoshPerry@hockomocksports.com and followed on Twitter at @Josh_Perry10.
Click HERE for a photo gallery from the game.