On Thursday morning at Blue Hill Country Club in Canton, the best golfers in the Hockomock teed it up for the league’s annual championship tournament. Among the league’s elite were three female golfers, seniors Tate Hadges of Oliver Ames, Jillian Berand of North Attleboro, and Kayla Schuberth of King Philip, which several of the coaches believed was the most girls to take part in the tournament in a single season.


Not only did the trio qualify for the tournament, Hadges and Berand were the top golfers on their respective teams and Schuberth’s average score was among the 20 best in the league coming into the week. For each of the three, and for Mansfield’s Ava Haggis who was not at the Hocks but was also one of the league’s top performers this season, being the lone girl on the boy’s team didn’t stop them from reaching their potential.

“I’m so happy when any of the girls play really well,” said Schuberth. “It’s just fun to see some of us dominating the guys’ league. It’s pretty cool.”

“It was weird coming in thinking I’m going to be in one of the top spots on the team and that’s something I hadn’t really done before,” Hadges said. “Coming off a strong summer gave me more confidence to say, yeah I’m a female on an all-boys team but I have the ability to do it and to compete against all of them.”

Each of the girls shared similar experiences of having to overcome the fear of trying out as freshmen. All four were the only girls on the roster from the start and have remained the only girl for all four years. Berand was the first girl to play varsity for the Rocketeers. It is hard enough being a freshman trying out for a high school sport for the first time, but added to that was the trepidation of trying to be accepted as a girl on a boy’s team.

“It was definitely intimidating,” Hadges explained. “Coming into high school was already intimidating for me and then going out for a boys team where I didn’t know what to expect or what I had to do to make the team was scary for me.”

Berand said, “I was definitely a little nervous at first. My freshman year we had seven or six seniors, but I was able to start every match. I proved myself that I was capable golf-wise and it just got better every year.”

It didn’t take long for most of them to find a spot on varsity, proving themselves to be worthy of inclusion in the team’s rotation, regardless of what the expectations were from teammates or opponents. “I think going up to the first tee you’re not expected to do as well because you’re a girl, but once you get into a round it’s been better and it’s nice to exceed expectations,” said Hadges.

All four of the girls spoke highly of their teammates and how their relationship with their teammates had grown closer over the years. It hasn’t been completely smooth sailing, but all four agreed that the risk that they took to try out has been worth it.

“Whenever I’m playing with any of my teammates, they just help me so much not only with my game but mentally, if I’m having a bad day, they’re always there to make sure I stay positive,” Haggis said.

Schuberth said, “I’ve was pretty much on the varsity squad since I was a freshman, so being the underdog and the girl it was tough but it was also a good time. You just work with it. I’m excited to be on a girls’ team next year.”

Berand noted, “Everybody’s been really respectful. I think maybe people are a little intimidated by Tate and Kayla and me because we’re girls and they know we can play. Maybe we’re a little bit of an intimidation factor.”

Hadges admitted that it was not instant acceptance, but that she has developed close relationships with her teammates over the four years of competition. She said, “It took a while, but some of the kids on the team that I’ve played with for four years are some of my best friends now and I think it’s great seeing where we started to where we all are now.”

Having other girls in the league that have gone through similar experiences has helped. Schuberth and Haggis have been good friends for years, and all four have competed with and against each other in various summer tournaments and leagues as well as facing off in the Hock.

“Just having other people to look up to who’ve been through it before was great and having Kayla and Tate and Ava, knowing there’s going to be another girl out there when I go to play is helpful,” Berand said. Hadges added, “It’s more welcoming having another girl there because you’ve gone through the same things they have.”

Haggis said, “Whenever I felt like it was hard for me, I could talk to Kayla and we shared the same difficulties of being the only girl. We’re very competitive against each other too, but in a good way because we always cheer each other on.”

With all four girls among the top golfers in the league, there is hope that their success will inspire more girls to take the leap. Berand and her family started the Girls Independent Golf League (GIGL) at The Links at Mass Golf in Norton. Hadges, Haggis, and Schuberth had all competed in GIGL tournaments and there are leagues that promote playing as a team.

“I’d love to look back in a couple years and see teams of girls competing in the Hock or even seeing a top four and they’re all girls,” said Berand, who has committed to play at St. Francis University. “The more that we promote girls in golf, the more girls will want to play and they’ll see it’s not just a sport for old people and that it can be a team sport.”

“I’m just really happy that girls are becoming more confident in themselves and putting themselves out there because it’s great to see,” said Schuberth, who will be playing at Franklin Pierce next year. “I just want every girl golfer to not be afraid to try out. You can do so well and it’s so good for you to be brave in that way.”

She added, “I want people to be able to see it’s possible. You can go and you can conquer. The confidence is great and I’m hoping more girls aren’t afraid to try out because I was very afraid as a freshman but I’m very happy that I did it.”

All four will be back in action this coming week at the sectional tournaments starting on Monday.

Editor’s Note: In addition to Hadges, Schuberth, Berand, and Haggis, sophomores Caroline Woelfel of Franklin and Rosie Leonard of Sharon and junior Brooke Bulger of Stoughton also played this season.

Click here for a full photo gallery from the Hockomock League Golf Championships. 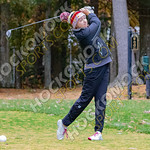 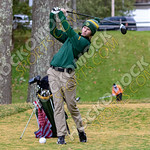 Josh Perry is the Managing Editor of HockomockSports.com. He can be contacted at JoshPerry@hockomocksports.com and followed on Twitter at @Josh_Perry10.