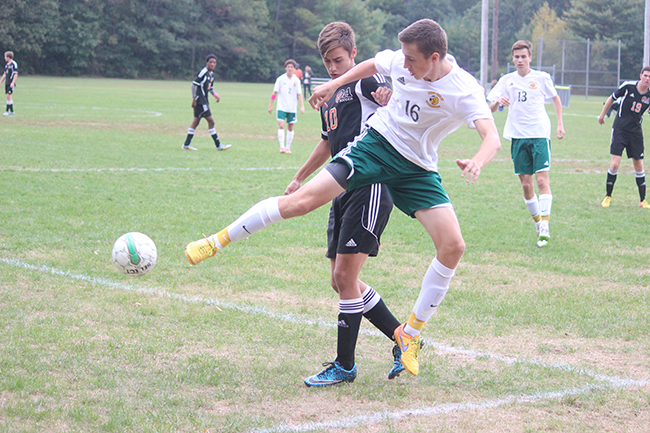 Click here for a photo gallery from the game.
By Ryan Lanigan, Editor-in-Chief
NORFOLK, Mass. – You see it so often in the game of soccer.
When one player shoots, players on both sides can get caught watching the outcome.
Nearly every one of the field players was guilty of that when Oliver Ames’ Chris Romero ripped a shot from 20 yards out in the 19th minute. The ball clanked off the crossbar, eluding the dive of King Philip goalie Brandon Ziolkowski, and came back into play.
There was one player, however, that wasn’t caught watching. Oliver Ames senior captain Keegan Nutt came running in all alone and headed home the ball off the rebound into an open net to give the Tigers the lead.
That goal would be enough as the Tigers (9-0, 9-0) continued their perfect start with a 1-0 win at King Philip.
“He did a great job,” Oliver Ames head coach John Barata said. “Chris’ shot was awesome and deserved a goal. I’m glad Keegan followed it up and finished because it would have been a shame if we didn’t score there.”
The goal came after Oliver Ames nearly scored the opener a minute earlier. Senior Max Bamford used a long throw in to get the ball into the area and sophomore Mason Galbato got his head to it and flicked it towards the back post but Ziolkowski got his finger tips to the ball and pushed it wide for a corner.
Oliver Ames continued to press in the first half, winning the majority of the duels in the midfield and didn’t let the Warriors get much going offensively.
It wasn’t until the 39th minute that the Warriors were able to register a serious scoring threat. A corner kick floated into the area was met by the head of Tom Lugten but his bid hit off the bar and Paul Kelley’s follow up attempt went over the bar.
Click here for a photo gallery from the game.
Junior Thomas McCormick nearly doubled Oliver Ames’ lead in the first minute of the second half, getting past a defender and getting a shot off at the near post but Ziolkowski was there to meet it once again.
Three minutes later, Ziolkowski was called into action again as a head back from a defender was a little short but before OA could get much on the attempt, Ziolkowski collected for the save.
“He’s improving as the season progressed,” KP head coach Nick Gale said of Ziolkowski. “His soccer IQ has been improving too. He wasn’t the reason why we lost today.”
OA again had a chance from inside the area in the 68th minute. Another long throw Bamford forced Ziolkowski off his line and he punched it clear. The ball eventually fell to Romero, who got a good shot in but Ziolkowski was once again back in position for the save.
The Tigers looked like they had doubled the lead in the 70th minute. A free kick from the right side from about 25 yards out was taken by sophomore Cam Vella. Instead of a service into the area, Vella hit a streaking Matt Campbell all alone to the right of the wall and the sophomore hit a tough angle shot that found the back of the net. But the referee blew the whistle and said the play was offside.
Just a minute later, Vella connected with sophomore Nathaniel Cardoza, who put Romero in on goal alone but a shot from inside the 18 was denied by Ziolkowski’s diving effort and the follow up chance was also saved.
“I think we had a lot of control in the game,” Barata said. “I think we were able to do what we needed to do in the game to get a lot of chances. I think we unfortunately missed 10 or 12 chances inside the 12 (yard box) and that’s a problem that we’ll have to address and fix as we get into the second half of the season.”
Click here for a photo gallery from the game.
Oliver Ames was able to create so many chances because of their play in the midfield. Between the play of Vella and Cardoza in the midfield and the efforts from Campbell, Romero, Galbato and sophomore Matt Alvarado, it was difficult for King Philip to transition from defense to offense. The Tigers have allowed just one gaol in nine games this season.
“I think transitionally we were very good,” Barata said. “Offensively even when we lost the ball we were very good to get back and defend and that’s kind of been our M.O. this year which is why we haven’t given up a lot of goals. I think it’s been our team defense and we’ve had consistent goalkeeping at the moment, Jack has done a great job, and the back line has done a good job.”
“When you’re constantly pressured and they have possession of the ball all the time, it’s very difficult to get into the flow of the game and build momentum,” Gale added. “I think we adjusted a little bit in the second half and hopefully that was on our part and not them sitting back a little bit more. I think we really lost this game in the midfield today. Defensively we held up as strong as we possibly could. Ryan Coulter and Cam Mullins did another phenomenal job back there.”
Oliver Ames will look to get its 10th win of the season on Tuesday when they host Attleboro to open a three game home stand. King Philip (5-6, 4-6) will continue its push for a playoff berth when they travel to Foxboro on Tuesday.
Click here for a photo gallery from the game.
Ryan Lanigan can be contacted at RyanLanigan@hockomocksports.com and followed on Twitter at @R_Lanigan.