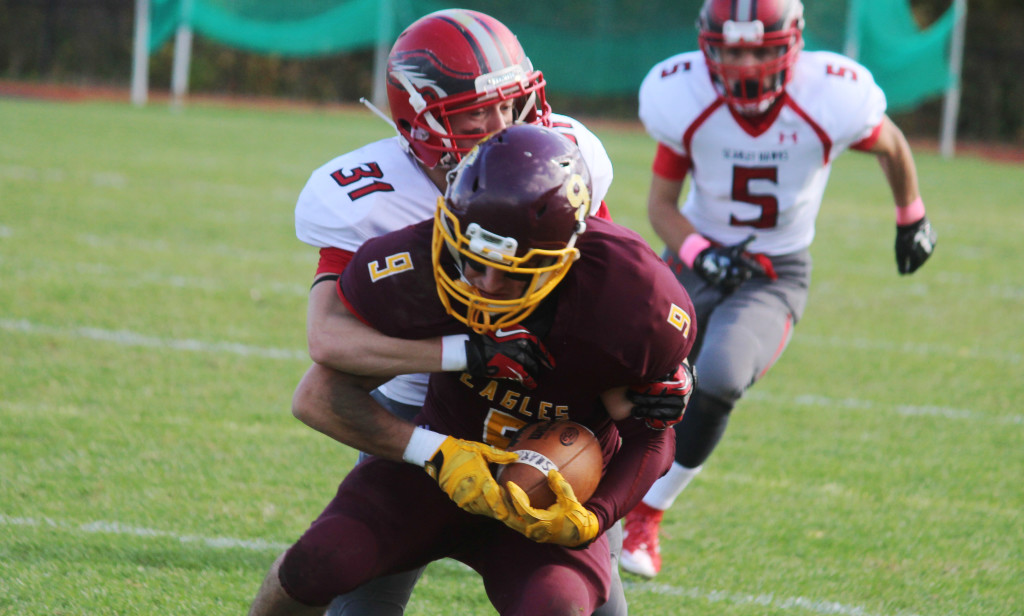 SHARON, Mass. – A week after giving up 42 points to league leading Foxboro, the Milford defense came into Saturday afternoon’s game at Sharon on a mission to give the Hawks a chance to play next week for a Div. 3 Southwest tournament berth.

Mission accomplished for the Hawks (3-3, 2-2), who forced three turnovers (two interceptions and a fumble) and held the Eagles (2-4, 1-3) scoreless until the final three minutes of the fourth quarter. Milford took advantage of the turnovers to pull out a 17-7 win that keeps the Hawks in the hunt for a spot in the playoffs.

“We had the tough loss last week and our kids knew that we needed this game for us to play meaningful football in November,” said Milford coach Joe Todd. “We played good defense all game to the very end…our emphasis all week was to play better defense and I think we got that done.”

Sharon took its opening possession all the way to the Milford 22. Junior running back Juvan Elisma carried the ball nine times on the drive for 24 yards and senior Rob Bayha (16-25, 197 yards) completed all three of his passes, but the Eagles could not finish and were stopped a yard short on fourth down.

Milford immediately marched downfield to open the scoring. Zach Lanzetta (9-12, 60 yards) was 3-3 on the drive, including an 11-yard completion to Leonard Moronta to the Sharon 16, and also ran for 12 yards. Junior Blake Hill had four carries for 31 yards and punched it in straight up the gut from four yards out.

Sharon’s second possession ended in a fumble by Elisma that was recovered by Milford’s Alec Salamone at the 25. But, the Eagles defense held strong and, with help from a holding call, forced Milford to punt.

“We gave up the turnover and gave them a short field and held them out, got the ball back,” said Sharon coach Dave Morse. “But Milford did a pretty good job when they had the ball of not getting too many three and outs, if any, and just moving the ball.”

He added, “They punted the ball real well and that was a big factor in the game.”

Once again the Eagles moved the ball and got into Milford territory. Bayha continued to be accurate with his underneath passes and spread the ball around to four different receivers, but he tried to go up top and underthrew his receiver down the middle and was picked off by Ryan Nesta at the Milford 33.

Morse explained, “It’s also bad when you have turnovers when the guy’s open. Overthrows or underthrows and you’re right there, it’s a little disheartening but it’s a game of inches and we’ll work on it.”

The Hawks marched 67 yards in nine plays, including a 23-yard completion to Hill that converted a first down, even with a block in the back penalty down the field. After an eight-yard run by Shapel Feester to the four, Lanzetta completed the drive with a four-yard keeper.

“That’s a good football team right there and without those turnovers, it’s a whole different game,” said Todd. “Hats off to our defense being in the right place, reading their keys, making plays when they had the opportunity and not dropping interceptions.”

On Sharon’s first possession of the second half, the Hawks defense again made a play to end a drive that had Milford on its heels. Hill made a leaping, twisting interception on a pass deep down the middle to get the ball at the Hawks 20.

“That was a huge play by Blake,” said Todd. “I think that was one of the biggest plays all game on defense.”

In the fourth quarter, Sharon was forced to go for it on fourth down at its own 24 and turned it over on downs. Four plays later Sean Lehane kicked a 33-yard field goal that put the Hawks ahead 17-0 with 3:25 left and seemingly wrapped up the win.

The Eagles needed a big play and, after narrowly missing on several deep throws, finally found the connection with Bayha hitting Craig Titus in stride on a post route for a 64-yard touchdown that cut the lead to 17-7 with 3:01 left.

“From week one we’ve certainly improved in the passing game,” said Morse. “Usually, the running game is there too but Milford did a great job of taking that away from us in large part.”

The Hawks ran out the clock and gave the ball back with only a few ticks left on the clock.

“We’re back to where we need to be,” said Todd. “We have a big challenge coming up this week with Stoughton…but we’re ready to go. Given the circumstances of our records, we couldn’t ask for a better situation. It’s going to be a good battle next week.”

Sharon will also be facing one of the three teams currently tied for the Davenport lead when it hosts Canton next week.

“They’re having a great season, they’re well coached, they have a lot of fight in them, a lot of toughness, and we’re going to give them our best shot,” said Morse. He added, “I don’t mind playing spoiler.”