By Ryan Lanigan, Editor-in-Chief
NORTH EASTON, Mass. – Rivals Oliver Ames and Sharon settled for a split in a doubleheader on Friday night, with the OA girls earned a big win and the Sharon boys holding on for a key Davenport title win.
The second half of the double header featured Don Byron’s Tigers, coming off their third straight win, and first-year head coach Andrew Ferguson’s Eagles, which was upset in overtime on Monday night.
Based on the momentum of the teams coming in, it was fitting that Oliver Ames to an 11-2 lead in the first six minutes but by halftime, the Eagles had settled in and earned a lead they wouldn’t relinquish in a 60-51 win.
OA senior Tim Kelley scored eight points while junior Nick Welch hit a three to give the hosts the big lead early on but over the final two minutes, Sharon closed the gap with six points from Andrew Filipkowski and two from Ricardo Ripley to cut the deficit to four (14-10) at the end of the quarter.
“I knew how jacked up for the game they were and I told them they had to play under control but the first six minutes we didn’t do that,” Ferguson said. “But at the end of the first quarter into the second quarter, we really executed. I thought we shot the ball pretty well once we broke the ice with that first bucket and then we just played great defense. Tyler Smith, Matt Lowerre, all three of our bigs, just did a great job. We ran the floor well. I would have liked to make a couple of layups but anytime we can come to Oliver Ames and get a victory is fine with me.”
Matt Lowerre’s take to the rim tied the game at 17-17 and then his three pointer gave Sharon its first lead (20-19). OA answered with a Mike Graziano three but points from Devon Mann, Tyler Smith and Ripley put Sharon ahead for good. Smith hit an open three and Ripley hit a pair of free throws to give Sharon a 30-24 lead going into halftime.
The lead stayed around six or seven points for the until five minutes were gone in the third quarter when Mitchell Sirota converted a put back and Filipkowski drove for two to make it 40-30. Filipkowski then drained a three to give the Eagles their largest lead (12) at 43-31. Two free throws from each Connor Moroney and Kelley were able to keep OA within striking distance at 43-35 going into the final quarter.
“It’s not very often that Sharon is going to have a size advantage in a game but we had it today,” Ferguson said. “We really wanted to work the ball with Mitchell [Sirota], Peter [Banks] and Devon [Mann] and defensively, they had some tall guys but it felt like we were bigger than them. Then our perimeter defense, other than a couple of times when we lost Kelley in the first half, was very good. We made it difficult to get the ball inside which is a big point for us.”
The Eagles had the lead at 11 three separate times in the fourth quarter and after two free throws from Sirota were up as much as 12 again (55-43), but OA continued to hang around. Two free throws from Carter Evin and a bucket underneath from Graziano made it an eight point game and with less than a minute to go, Graziano drained a three to cut it to seven, but Sharon was able to hit their free throws and hold off any late charges from OA for the win.
“We said on the bench we were looking for a run, a 6-0 spurt but I don’t think we did all night,” Byron said. “I felt like we were working pretty hard on it and I thought the rebounding would go our way a bit, which is a good sign. We just made some mistakes, some uncharacteristic. We’ve been better on the ball than we were in that first half. There was a time were they were having some difficulty scoring but we didn’t take advantage of it.”
Ripley and Smith both finished with 12 points and a pair of rebounds, Filipkowski had 11 points, Sirota had seven points and four rebounds, and Banks had six points and 10 rebounds. For Oliver Ames, Kelley had 14 points, Dylan Mahoney and Graziano each had 10 points and Shawn Cardoza had 11 rebounds to go with three points.
“I tell the guys we’re a much better basketball team when the scoring is spread out,” Ferguson said. “When we’re sharing the basketball, we’re buying into it, that means we’re not getting into too much isolation and we’re getting out on the break. After a tough game on Monday, I think having Oliver Ames next on the schedule was a good thing, we were really focused in practice and we had a great talk. Once we got on the bus, I knew everyone was ready to go.”
Sharon (4-3, 3-2) will look to make it two in a row when they travel to King Philip (0-6, 0-5) on Tuesday while Oliver Ames will look to get back in the win column when they travel to Mansfield (5-1, 4-1) the same night. 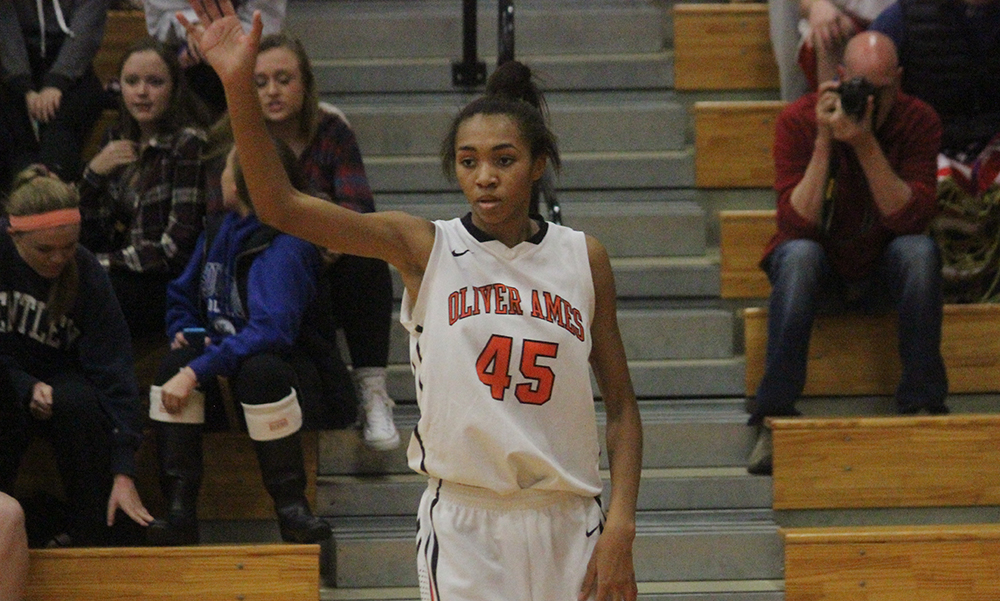 Right from the start, the Lady Tigers were relentless with their pressure, using a full court press and athleticism to force turnover after turnover.
That defense led to offense for Oliver Ames, which led to a a double-digit lead by halftime and a big 62-30 win over Sharon to improve to 7-0.
The Tigers set the tone on the boards early, using an offensive rebound to get their first basket and then raced continued on for a 12-0 run. OA made it tough for Sharon every single trip up court and then quickly converted on the other end with Kayla Raymond, Kaitlyn McCarthy, Francesca Calabraro and Niyera Mitchell all contributing to the early run.
A 14-4 lead after the first quarter quickly turned into a 15 point advantage when Hannah Carroll drained a three then Calabraro followed up with a jumper. Sharon’s Alyssa Piazza (team-high 10 points) scored three straight for the Eagles but baskets from Kayla Raymond, Samantha Bamford and McCarthy pushed the Tigers’ lead to 25-7.
By halftime, Oliver Ames was up 29-12.
“Turning defense into offense, that’s really what we’ve been living off of,” OA head coach Laney Clement-Holbrook said. “And it helps that we have a lot of athletes, they all play physical and it gets them all jeeped up, which is nice. There will be days when they try to take it away from us. But in the instances people take that away from us like tonight, whether it be self inflicted or what Sharon did to us, I thought we moved very well without the ball and that to me was huge progress.”
The Tigers had their best scoring quarter of the game by scoring 17 points in the third quarter. OA shot 8/15 from the field in the quarter with five different players scoring. Calabraro had five, Bamford and Mitchell each had four and Raymond and McCarthy each hit field goals.
One big reason for the win was how much OA dominated the rebounding battle. The Tigers were able to pull down 23 of their 35 rebounds in the first half to help created the double-digit advantage.
“The first half we had around 25 rebounds, I actually checked with my assistant because that was one of the things we were focusing on,” Clement-Holbrook said. “I’m trying to get them to understand grit and it comes from that kind of stuff and they really did a good job.”
Junior Niyera Mitchell scored a career-high 16 points and pulled in 13 rebounds to pace Oliver Ames while Kaitlyn McCarthy had 13 points and three assists, Francesca Calabraro had 11 points and four rebounds and Kayla Raymond had six points and seven rebounds.
“Best game of her career, she did well against Sharon last year too,” Clement-Holbrook said of Mitchell. “This was really meaningful [for the whole team] because we’re trying different rotations based on what the match ups are. For them, it’s a new experience with the lineups changing. They just all need to bring it, because they all play. I have nine girls on the roster and every single one of them have contributed in every game, it’s awesome.”
Oliver Ames (7-0, 5-0) will host Mansfield (7-2, 5-0) in a battle of league unbeatens on Tuesday at 6:30. Sharon (3-4, 1-4) will look to get back in the win column when they host King Philip (1-6, 0-5) on the same night at the same time.
Ryan Lanigan can be contacted at RyanLanigan@hockomocksports.com and followed on Twitter at @R_Lanigan.