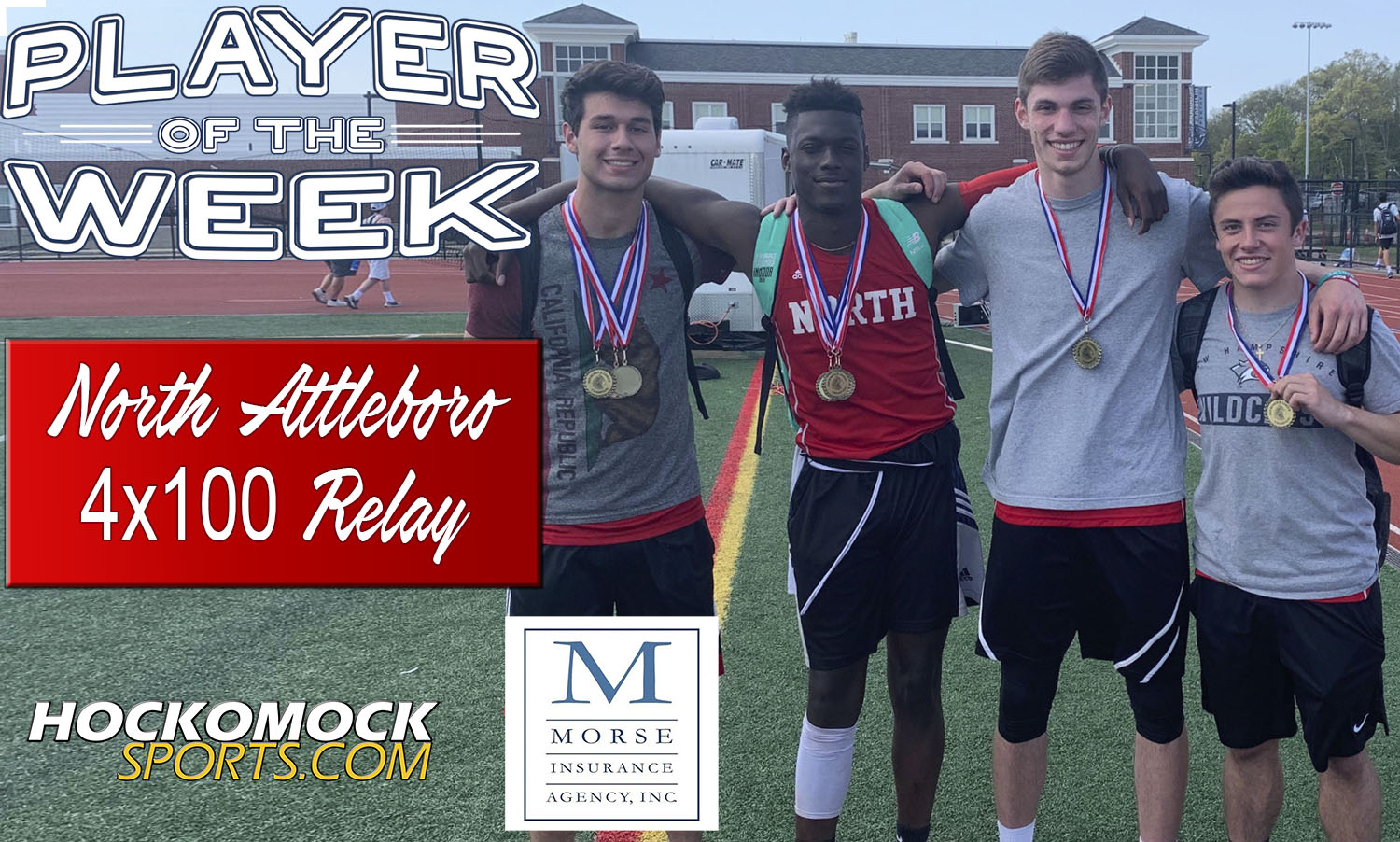 North Attleboro boys track 4×100 relay team has been selected as the HockomockSports.com Player of the Week, presented by Morse Insurance, for May 12 through May 19. The North boys are the 30th Player of the Week chosen for the 2018-19 school year and the seventh selection in the spring season.

The four members of the relay team, Liam Conway, Jacob Petersen, Omar Jasseh, and P.J. Gilpatrick, combined to set a new school and meet record in the 4×100 and also brought home three other individual titles at the annual Hockomock League Outdoor Track & Field Championships, held this weekend at Franklin High. In addition to the first place trophies, they combined for a third place, a fourth, and a fifth place in individual events, helping Big Red take third as a team with 91 points.

“This team has run together quite a bit throughout the season, and they have put a lot of work on perfecting handoffs, and that work still isn’t done,” said North Attleboro coach Scott Holster. “They all had great days individually at the meet, but for them to come back and run that time reflected the emphasis they all put on teamwork.”

The 4×100 relay took first with a time of 43.09, which was a full second faster than the second place finishers from Stoughton (44.21). In the 100-meter sprint, Gilpatrick earned his second first place medal with a time of 11.07, narrowly edging out Mansfield’s Greg Water by just one hundredth of a second. Gilpatrick (22.61) and Conway (22.86) finished third and fourth in the 200-meter race, just tenths of a second behind the winner.

It was not only on the track, but also in the field events that the quartet found success. Jasseh earned a pair of individual titles to go along with his first place finish in the relay. He won the long jump with a leap of more than 22 feet, which was nearly a foot farther than his nearest competitor, and the triple jump with a distance of 42 feet, seven inches. Petersen took fifth in the triple jump, compiling a distance of 41 feet, two inches.

The Player of the Week, presented by Morse Insurance, is selected by the HockomockSports.com staff. Nominations can be submitted throughout the week up until Saturday night at midnight. There may be a poll posted on Sunday with the nominations. The results of the poll influence the selection but do not strictly dictate the decision.