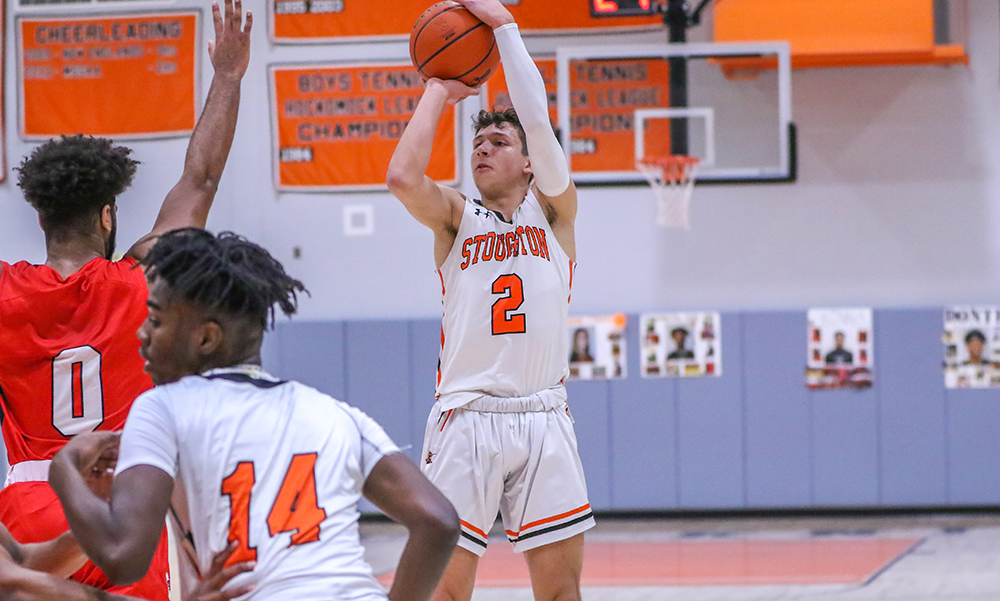 STOUGHTON, Mass. – Stoughton head coach John Gallivan has seen a lot in his 16 years patrolling the sideline as the head coach of the Black Knights, and even he had trouble trying to put Tuesday night’s game into words.

A wild back-and-forth contest between Stoughton and Davenport foe Milford, a battle for first place in the division that saw a handful of momentum swings with the biggest one coming in the final seconds of overtime.

Trailing 74-73 with under a minute to go in overtime, Stoughton senior Myles Grigalunas-Powell (20 points, 11 rebounds, 10 assists, five steals) made a move to the basket before pulling up at the free-throw line.

The shot was off the mark but the senior forward alertly followed his shot, the rebound tipped right to him. He pulled the ball back to the corner, took a quick look around the court before pulling up and sinking a contested three-pointer for a 76-74 lead with 10 seconds left in the overtime period.

The Scarlet Hawks beat the buzzer in regulation to force the extra period but Stoughton’s full-court press prevented the visitors from getting a look at the tying or winning basket. A trap in the backcourt led to a turnover and an emphatic slam from senior Obinna Ugwuakazi (15 points, five rebounds) just before time expired to seal a 78-74 win for Stoughton.

“Everyone was crashing the boards on the left side, I followed my shot and it came back to me on the right side, I grabbed it and went to the corner,” Grigalunas-Powell said. “At first I hesitated to see if anyone else was open but then I just pulled it.”

With the win, Stoughton pulls into a first-place tie with Milford and Foxboro with one game to go. None of the three teams are playing each other, meaning there could be anywhere from one to three Davenport champions. It also marks Gallivan’s 175th career win.

“We’ve had a couple of games like that, we’ve had some comebacks like that,” Gallivan said, citing close losses to Franklin and Randolph. “The first half didn’t go our way. They smashed us so early that we kept saying we had time.”

Long before Stoughton’s mini-comeback in overtime, the Black Knights had to erase a much larger deficit.

The momentum carried into the second quarter as the Hawks’ offense continued to find success and its’ defense, using a full-court press, forced Stoughton into 12 first half turnovers.

Just beyond the halfway point of the quarter, Milford used a quick 9-4 surge to push their lead to its peak, a 19-point advantage, 41-22, following a triple from Pires with 1:45 left in the second quarter.

But Stoughton had arguably its most important stretch of the game to close the first half. Reserve Eddie St. Hilaire drove to the basket for two, Donte Tyler came off the bench to grab back-to-back steals, the latter resulting in two free throws. Ahmad Jahed (14 points, four rebounds) came up with a steal and went in for a dunk, and then got back on defense to get a steal that led to a three from Grigalunas-Powell that beat the buzzer, an 8-0 surge that gave Stoughton life.

“What Ahmad did in the last 30 seconds was unbelievable,” Gallivan said. “To steal it, go the length of the court and dunk it, and be the first guy back to steal the next one, that’s amazing. The kids needed something and that was huge right before halftime.

“And [Milford] kept coming each time. I wasn’t there the first time, video does not do them justice, they are really good. It’s a hard 32 minutes and tonight it was a hard 36 minutes.”

This time the momentum stayed with the hosts as Stoughton opened the third quarter on a 16-4 run with five straight from Jahed, a three from Tyler, two from Tahkwan Gates Brown (18 points, seven rebounds), and back-to-back threes from Grigalunas-Powell tied the game at 46-46 with four minutes left in the third.

Tyler sank his second triple of the game and Stoughton had its first lead of the contest.

“He was a spark for us,” Gallivan said. “He hasn’t had a ton of minutes for us this year but talk about seizing the opportunity. Both ends of the court, gave us something on defense and offense.”

Buckets from Darling and Pires helped Milford keep pace but a baseline jumper from Ugwuakazi gave Stoughton a 53-50 lead after three.

“We knew this wasn’t going to be an easy game but we’re confident in each other and we knew we could pull through,” Grigalunas-Powell said of the turnaround. “We’re all confident that anyone on the team can make a shot, can make a play.

“We just told each other it’s not over, we weren’t going to give up.”

Stoughton pushed its lead to seven early in the fourth but Pires buried a three, Dom Schofield (11 points) beat the shot clock with a baseline jumper and then crashed the boards for a tip in to bring the Hawks within two. Jahed converted off a steal for Stoughton but Pires scored off a nice feed from Wetherbee and Darling had a strong take to make it 61-61 with 2:50 to play.

Ugwuakazi responded for Stoughton with back-to-back buckets but Wetherbee hit a three from the corner to keep Milford close. After a pair of empty possessions from each side, Jahed hit one of two from the line with 12 seconds to go to make it 66-64 but Pires came down and sank a jumper from the free throw line to beat the buzzer and send the game to overtime.

Ugwuakazi and Wetherbee traded baskets before the Hawks got a stop and Blanchard converted in transition to give Milford its first lead since the third quarter. Grigalunas-Powell collapsed the defense when he started to the basket but dumped it off for an easy two from Gates Brown to tie it again.

Blanchard put Milford back up with a pair of free throws and Stoughton threw the inbounds play away, giving the Hawks the ball back. Ralph Franklin Jr. had a strong take through the heart of the defense and Milford took a 74-70 lead with a minute to go.

Milford even got a stop on Stoughton’s ensuing possession but the Black Knights forced a quick turnover to get the ball back and Grigalunas-Powell found Gates Brown for two, plus the foul. After hitting the free throw, Stoughton’s full-court press paid off as Milford was whistled for a backcourt violation, the Hawks’ 17th turnover of the second half/overtime, leading to Grigalunas-Powell’s go-ahead three.

“In the last two games, when we’ve needed [Grigalunas-Powell] at his best, he’s been almost perfect in terms of knowing when to pass, when to shoot,” Gallivan said. “And [Tahkwan] had a good game too, we talked about how he did well the first game against them. We tried to run stuff to Obinna’s side so it’d end up with Tahkwan at the end but [Milford] does such a good job mixing up their defenses that when you finally get the guys where you want then, they aren’t in the defense you wanted them in.”

Stoughton boys basketball (8-7 Hockomock, 11-8 overall) has a chance to clinch a share of the division title when it hosts Sharon on Friday night. Milford (8-7, 10-7) has the chance to do the same when it entertains Canton on the same night.