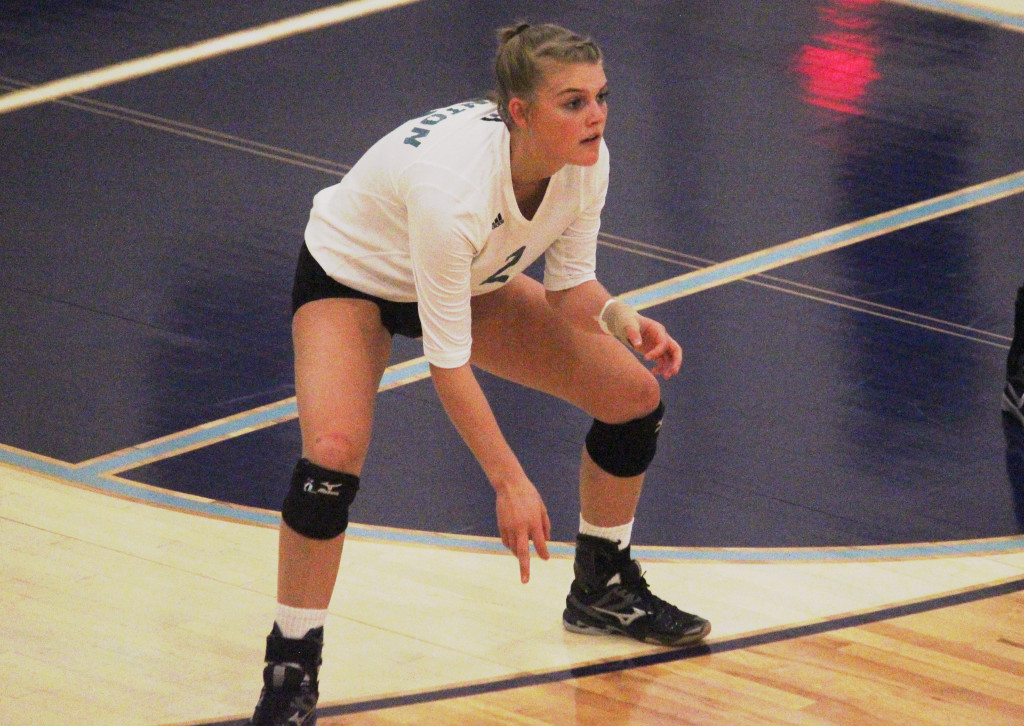 By Ryan Lanigan, Editor-in-Chief
FRANKLIN, Mass. – In a battle of division leaders, it was the visiting Canton Bulldogs that jumped out to a big lead in the first set and went on to grind out wins in the next two for a sweep over Franklin, 3-0.
“We got a good start, a really fast start, which is something we’ve really been working on,” Canton head coach Pat Cawley said. “We did very well with that. It’s the game of volleyball, one team comes out flat and one team doesn’t but we knew the match wasn’t over. We did not feel like we were in the drivers seat, we knew they would come back. And the second two sets proved that, it was pretty even the rest of the way.”
Within a matter of minutes, Canton found themselves with a 10-1 lead on the Panthers and never looked back in the first set. A block kill from senior Elizabeth Hamilton made it 13-3 and then a kill from Emma Murphy just a few plays later made it 18-4, forcing Franklin to take its second timeout. The Panthers didn’t help themselves out in the first set with 16 unforced errors however, Canton did its part by being nearly perfect while serving. The Bulldogs made just one error while serving, which helped create their big lead.
“I’m not an aggressive, jump serving kind of coach, I only let one player do that,” Cawley said. “I prefer to have the kids put the ball in play and see what we can do. I think the best serving team has a huge advantage. Serve receive is hard for every team at every level, high school or college. You’re supposed to get the first offense on serve receive but if you can put the serve in play at the high school level you often get the first offense on the free ball that comes back.”
Canton took the first game 25-12.
Franklin got off to a good start in the second set and after a kill from Aubrie Kutil made it 6-1, the Bulldogs were forced to call a timeout. The timeout worked as Canton was able to slowly work its way back into the second set. Franklin went up 12-9 but a kill from Sarah Reissfelder, a Franklin error and then a kill from Hamilton tied the game. Canton took the lead off a passing mistake and would never trail again. A perfect kill down the line from Hamilton was followed by an ace from Kehla Minkin and a kill from Murphy made it 19-15.
Franklin got within three at 22-19 behind an ace from Dayna McCue but the Bulldogs were able to close out the second set, 25-20, to take a two set lead.
“They’re a good team,” Franklin head coach Kate Horsmann said of Canton. “I think the first time I called timeout in the first set they had eight points and they only earned two of them, six of them were on our errors. Unfortunately that’s a habit we’ve gotten into. Our problem is that we’re so tight when we play good teams. We looked like a deer in the headlights and that’s what happened to us. Even when we’re playing well and then they do some good things, we get tight again. There’s really no reason for that. Canton totally outclassed us tonight.”
The third set was by far the closest of the three with the largest lead from either side being four points. The teams were tied 11 times, including at 21, 23 and 24 apiece.
Canton’s biggest lead early on was 9-7 but a pair of hitting errors tied the game. Franklin went up by four twice at 16-12 and 20-16 but a Hamilton kill and another Minkin ace closed the first gap and a pair of errors erased Franklin’s second lead. Trailing 23-21, a perfectly placed hit from Rye Verille was followed by yet another Hamilton to tie the game. The teams traded errors to get to a 24-24 tie. Hamilton got her ninth kill of the third set alone to give Canton the lead 25-24 and a hit out of play by Franklin gave Canton the win.
“I think the third set was when we played up to our potential,” Horsmann said. “It’s disappointing when you don’t win it, but at least you know you played to your potential. The first set we were awful and the second one we did some good things but we didn’t play to our potential. I think if we came out and played to our potential for three sets it would have been a better trip for Canton. It’s a long way to come for what we gave them.”
Hamilton finished with a game-high 21 kills with 16 of them coming in the final two sets.
“Elizabeth I think is definitely among the best in the Hock I’d say,” Cawley said. “She plays great defense, she’s a good hitter, she’s under control. She understands the game and obviously she’s our go-to person when we need something.”
The pairing of Hamilton and libero Olivia Devoe proved to be a strong tandem for serve receive and helped get the Bulldogs’ offense in motion. Devoe finished with 23 digs while Hamilton had 13 digs.
Nicole Poole had 30 assists and seven digs while middles Murphy and Verille combined for 12 kills and a pair of kills.
Canton (9-1, 9-1) will look to extend its seven game winning streak on Tuesday when they host Taunton. Franklin (9-2, 8-2) will look to bounce back when they hit the road on Tuesday at Stoughton.
Ryan Lanigan can be contacted at RyanLanigan@hockomocksports.com and followed on Twitter at @R_Lanigan.