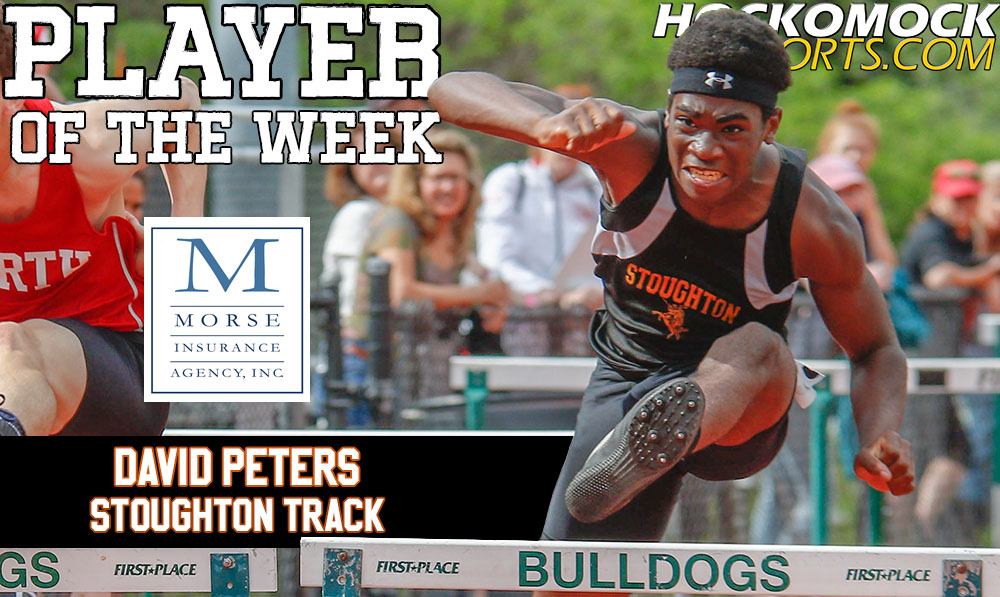 Stoughton sophomore David Peters has been selected as the HockomockSports.com Player of the Week, presented by Morse Insurance, for May 20 through May 26. Peters is the 30th player selected for the 2017-18 school year and the seventh player chosen during the spring season.

Peters took first place in the 110-meter hurdles at Saturday’s Div. 3 Meet, which was held at North Reading High. He also took part in the 4×100 relay, helping the Black Knights take eighth place just a little more than a second behind the winning team from Bishop Feehan, and he took 13th overall in the long jump with a leap of more than 20 feet, four inches.

“He is an incredible talent and the epitome of a scholar-athlete,” said Stoughton track coach Bill Horan. “He qualified in five different events this year but was significantly strong in the 110 hurdles. Our hurdles coach, Xavier Dixon, works hard to challenge him every day and has been preparing him for the state level meets.

“David cares about his teammates, is a fierce hurdler, and runs with passion and heart. He gets stronger every single meet and rises above his competition when the pressure is on him. It’s really been exciting watching him grow this season and we are excited to see how far he will go.”

This has been a difficult week for the Stoughton track team after the tragic deaths of four classmates, including two of their teammates, in a car accident just a day before the Black Knights competed in the Hockomock League Championships. Stoughton showed incredible resolve and resiliency to take part in the meet despite their sadness and earned deserved respect from across the league for their remarkable performances despite terrible circumstances.

“David demonstrated the same drive, focus, and heart at Hocks and D3’s that he has demonstrated all season,” said Stoughton coach Jen Ceolinski. “He is the hardest working, most humble young man you will ever meet. David’s endless pursuit of greatness will surely lead to many more accomplishments in his junior and senior years. We are honored that he is a member of our SHS track and field family.”

At the Hockomock Championships, Peters won the title in the 110-meter hurdles in a time of 15.03, edging out Jonathan Schultz of North Attleboro by 0.01 seconds. He also jumped further than 20 feet in the long jump, taking fifth. At North Reading this weekend, Peters beat his time at Hocks by nearly 0.40 seconds, finishing in 14.64 — setting a new personal best.