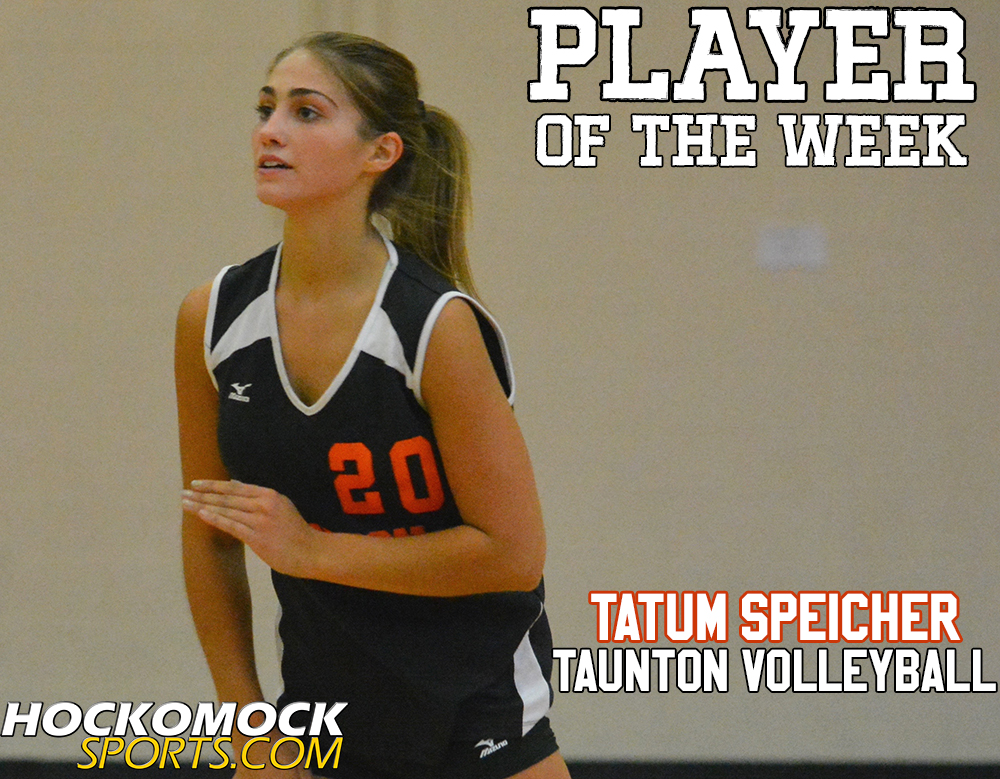 Taunton senior setter Tatum Speicher has been selected as the HockomockSports.com Player of the Week for October 25th through October 31st; the eighth player chosen in the 2015 season and first volleyball player. Speicher became the first player in program history to get 1,000 assists, doing so in a win over King Philip.

Speicher hit the milestone in the deciding fourth set against the Warriors, an impressive bump set from off of the court for the first kill. Taunton won the match 30-28, 27-25, 20-25, 26-24 and Speicher finished with 34 assists.

“Tatum is the kind of player that leaves it all on the court,” head coach Toby Chaperon said, “As evidenced by her injury at North, she will sacrifice her body to make a play for her team. She is a great leader as well as she rarely gets rattled and will always find a way to pick up her teammates.”

In Taunton’s second match of the week (a 3-0 setback to Mansfield), Speicher had 25 assists, five digs and a pair of service points against the Hornets. She has 1055 career assists with almost half (498) coming this Fall.

“She also has fun as she is usually smiling and using that positive energy to keep her teammates loose,” Chaperon said.

Taunton finished the regular season 12-8 in what was the most competitive Kelley-Rex division since the split and one of the toughest seasons in the past decade. The Tigers qualified for the postseason for the first time in over a decade.

Player of the Week is selected by the HockomockSports.com staff. Nominations can be submitted throughout the week up until Saturday night at midnight. There will be a poll posted on every Sunday with the nominations. The results of the poll influence the selection but do not strictly dictate the decision.