Below are the official 2017 Hockomock League Girls Cross Country All Stars, selected by the coaches in the league.

Below are the official 2017 Hockomock League Girls Indoor Track All Stars, selected by the coaches in the league.

Below are the official 2016 Hockomock League Girls Cross Country All Stars, selected by the coaches in the league.

Foxboro, 1 @ Oliver Ames, 0 – Final – Foxboro’s Emma Daly scored the lone goal of the game, netting the game-winner in the second half for the Warriors.

Stoughton, 0 @ Franklin, 3 – Final – Kayla Marshall scored 10 minutes into first half on a pass from Annie Walsh and Brayden Downing with 10 minutes left in first half on another pass from Walsh to make it 2-0 at the break. Freshman Maeve Ledwith got her first career goal with 12 minutes left in the game on a pass from Erin Walsh. Christina Lucini and Sam Hertzberg combined for the shutout each making one save.

Golf
Sharon, 168 @ North Attleboro, 155 – Final – Robbie Congdon led the Rocketeers, who clinched at least a share of the Davenport division title with the win, with a low round of 34. Dylan Kane shot a 39, David Colasanti shot a 40 and Jillian Barend carded a round of 42 for Big Red. Sharon’s Max Avratin shot a 38.

Attleboro, 159 @ Oliver Ames, 143 – Final – Brady Allbritton and Ryan McGarry shared match medalist honors, both carding a low-round of 35. Mark Bissonette shot a 36 and OA and Nick Lombardi shot a 37. Attleboro had one of its best performances in recent seasons with Kyle DelSignore shooting a 38, Corey McKenna carding a round of 39, Ethan Johnson shooting a 40 and Brian Houle carding a round of 42.

Milford, 171 vs. Nipmuc, 172 – Final – Milford’s Ryan Tomaso was the match medalist, shooting a 38 to help the Scarlet Hawks edge Nipmuc.

Girls
Attleboro, 48 @ Franklin, 15 – Final – Franklin had the top five finishes in the race, led by junior Nicole Clermont. Clermont won the race in 21:41 while classmates Kate Hartnett and Ella Gutkowski came in second and third in 21:42. Sophomore Katrina Walbert was fourth in 21:55 and junior Brianna Cummings crossed the finish line in 21:57 for fifth overall.

Boys Soccer
King Philip, 1 @ Attleboro, 1 – Final – Tyler Mann gave the Warriors a lead in the second half but Ahijah Joseph equalized in the final ten minutes as KP and Attleboro finished level.

Sharon, 1 @ Foxboro, 0 – Final – Ben Stromm headed home a corner with four minutes remaining in the game for the Eagles.

Mansfield, 3 @ Taunton, 0 – Final – Mansfield senior Max Gurnon opened the scoring with a heads up free kick, catching Taunton off guard with a free kick from midfield to put the visitors up 1-0 just seven minutes into the game. Just before the half hour mark, James Chotkowski headed in a throw in from Gurnon to give Mansfield a 2-0 lead at half. Jackson Murphy capped the scoring for Mansfield in the 65th minute, finishing off a free kick from Sam Hyland. Jed Tolbert made six saves in recording his second straight shutout for Mansfield.

Girls Soccer
Attleboro, 0 @ King Philip, 5 – Final – Chloe Layne scored a pair of goals for the Warriors and Emma Corcoran had a goal and an assist. Avery Snead and Logan Greenberg also had goals for KP and Maddie Smith added an assist. Madison Brown made 12 saves for the Bombardiers.

Canton, 0 @ North Attleboro, 4 – Final – Ashlyn Gaulin and Haley Ferrin both scored a brace for the Rocketeers. Haley Guertin recorded a pair of assists and Rachel Labonte had an assist for North.

Foxboro, 4 @ Sharon, 1 – Final – Hailey Mailing scored a hat trick for the Warriors, lifting Foxboro to its first win of the season. Alex Rabb scored from the penalty spot for Sharon.

Taunton, 0 @ Mansfield, 4 – Final – Hannah Reiter scored a goal and recorded an assist for the Hornets. Emma Oldow, Emma Goulet and Bryn Anderson each scored a goal for Mansfield.

Franklin, 1 @ Oliver Ames, 1 – Final – Miranda Smith scored the opener for the Panthers and Lauren Wright tied it off a cross from Julia Roy for OA in the second half.

Golf
Oliver Ames, 149 @ Mansfield, 172 – Final – Brady Allbritton shot a 34 at Norton Country Club to earn match medalist honors, leading OA to another win. Ryan McGarry added a 37 and Matt Kelley finished with a round of 38 for the Tigers. Brendan Loomer shot a team-low 41 for the Hornets.

North Attleboro, 195 @ Canton, 194 – Final – In a battle of the top two Davenport teams, the match was forced to a fifth card and Canton emerged with a one stroke victory. Tommy Dimock led the way for the Bulldogs with a round of 37, Matt Minichiello and Danny Powers both shot 38 and Jackson Maffeo carded a round of 40. North Attleboro’s Dylan Kane was the match medalist, finishing with a round of 36 while Robbie Congdon shot a 37 and Tyler Sincola shot a 39.

Franklin, 20 @ Taunton, 39 – Final – Franklin placed a trio of juniors in the top four places, including the top two finishers, to beat Taunton. Nicole Clermont placed first in a time of 21:05 while Kate Hartnett was second in 21:13. Ella Gutkowski finished in fourth overall, clocking in at 22:08.

Boys Soccer
Attleboro, 2 @ Stoughton, 1 – Final – Nick Lawrence scored a pair of goals for the Bombardiers, with assists coming from Will Halben and Harry Lancaster. Stoughton’s Noah Schulze scored the lone goal for the Black Knights.

King Philip, 1 @ Foxboro, 0 – Final – KP junior Connor Mullins won possession at midfield, got forward and played a through ball, setting up Tyler Mann for the lone goal of the game in the 67th minute to lift the Warriors to the win.

Foxboro, 3 @ King Philip, 5 – Final – Freshman Avery Snead scored two goals for KP. Senior Rachel Hogan and freshman Chloe Layne each had a goal and two assists and senior Maddie Smith added a goal and an assist for the Warriors.

North Attleboro, 6 @ Taunton, 1 – Final – Haley Guertin scored two goals and had two assists to lead the Rocketeers. Sophomore Ashlyn Gaulin chipped in with a pair of goals and Felicity Monfils and Leah Jette each scored one. Kayla Pasquel and Rachel Labonte had assists for North.

Milford, 0 @ Franklin, 4 – Final – Miranda Smith scored a pair of goals for the Panthers and Nadia Havens recorded a goal and an assist. Halle Atkinson also had a goal for Franklin, while Ellie Teixeira, Abigail Gipson, and Emily Mastaj had assists. Ashleigh Starks played well in midfield for the Hawks, according to head coach Jay Mastaj.

King Philip, 174 @ Mansfield, 169 – Final – Jason Hindman shot a one under par 35 at Norton Country Club to lead the Hornets. Junior Brendan Loomer shot a 44 while David Norris and Madison Haughey each shot 45. Sebastian Ladoulis led King Philip with a 41.

Oliver Ames, 156 @ Taunton, 194 – Final – The Tigers of Oliver Ames had a consistent day at Segregansett Country Club. Ryan McGarry, Mark Bissonette, Nick Lombardi and Thomas Walsh all tied for the match medalist, with each shooting 39 on the day. Justin Proto led Taunton with a 43.

Milford, 167 @ Sharon, 173 – Final – Ryan Tomaso was the match medalist, shooting 39 at Spring Valley. Anthony Arcudi added a 42 for the Scarlet Hawks. Andrew Glaser led the way for Sharon, carding a 40.

Oliver Ames, 25 @ Franklin, 30 – Final – Oliver Ames secured three of the top five spots to edge out the Panthers. OA’s Brent Schwartz won in 17:31 while Zane Reservitz finished fourth in 18:03 and Colin Herschlag was fifth at 18:05. Franklin’s Everett Henderson finished in second at 17:44 and Mike Hagen was third at 17:49.

Girls
King Philip, 15 @ Attleboro, 46 – Final – King Philip had the top five finishes in the race, cruising to a win on the road. Nina Sitarski won the race with Erin Quinn, Lucy Hamilton, Leia Quinn and Erica Layna rounding out the top five for the Warriors. Ellen Marshall finished six and Victoria Pike was seventh to lead Attleboro.

Oliver Ames, 32 @ Franklin, 23 – Final – Franklin grabbed the top three finishes in the meet, securing the win over Oliver Ames. Nicole Clermont won the race in 19:58 with Kate Hartnett finishing second in 21:22 and Ella Gutkowski rounding out the top three in 21:51. Liz Peckham, Anna Loewald, Caroline McCarthy, and Jordan Rainville finished in the fourth through seventh places for OA. 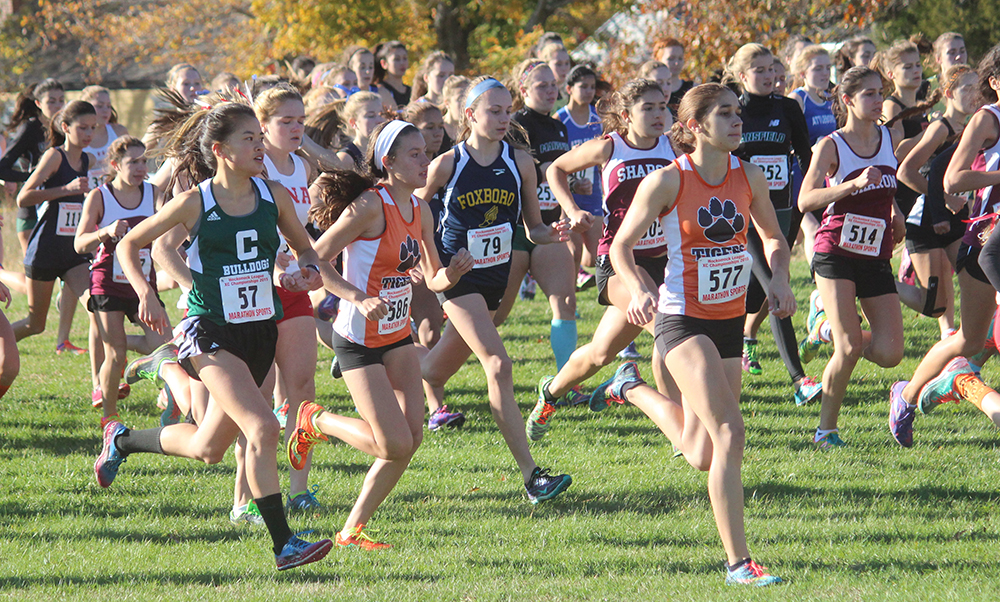 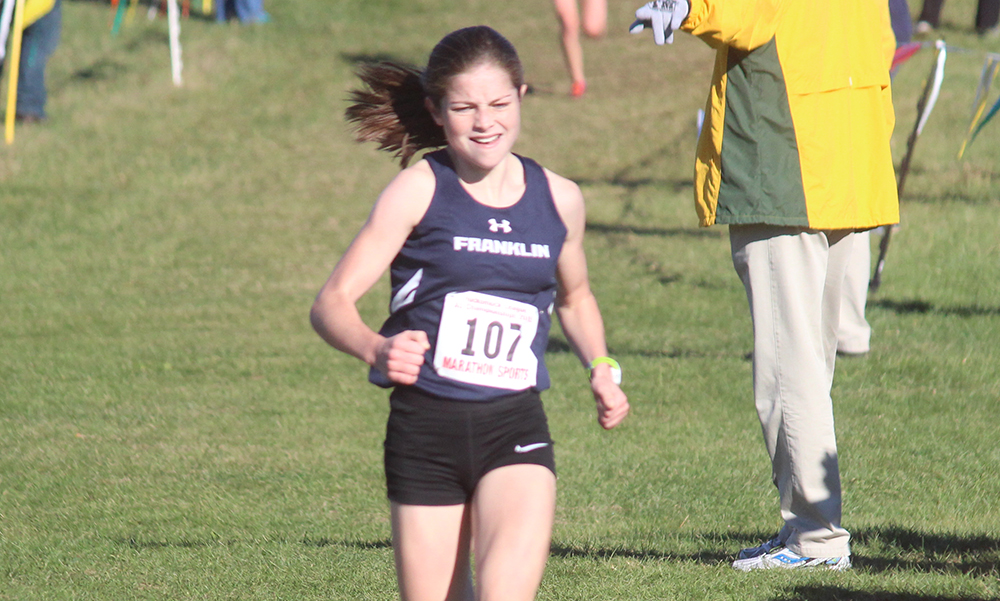 Below are the official Hockomock League Girls Cross Country All Stars, selected by the coaches in the league.